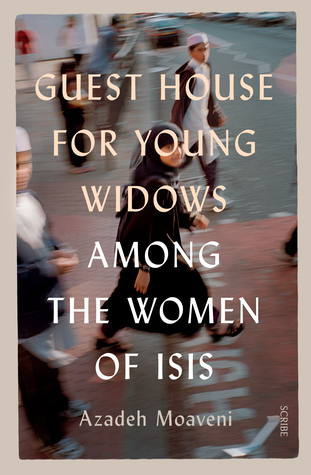 Guest House for Young Widows follows thirteen young women from varying backgrounds and countries who had left their comfortable lives behind to join the Islamic State. There are various ways women were recruited, motivated, or forced to join the militants and sometimes were entangled with their loved ones' decisions. This piece of investigative reporting also offers us to look into the women who joined the group with more nuance and compassion to understand these conditions. There are still thousands of Islamic State women and children in camps and detention centres across the Middle East awaiting death sentences, suspended in stateless limbo or resigned to permanent incarceration.

The writer offers a compelling opening story with a brief history of Tunisia and unfolds the development and influence of Islam in the country's politics. Nour, who is just thirteen years old, chose to wear a niqab (face veil) in school after watching a Youtube video of a Sheikh preaching about the obligation for Muslim women to wear a face veil. Nour's sudden impulse resulted in her being suspended for 10 days from school. In a different country, Emma was struggled with her own identity and found Muslim families are more caring and lovely after visiting her Muslim friends. At the same time, she felt native Germans were racist, although she is half-German. All those factors motivated  Emma to convert to Islam, especially after a short conversation about the hijab practice with an imam.

On a separate account, Rahma and Ghoufran had changed differently after encountering an imam at a dawah stall. Rahma became an extremist and began policing the decency of other Muslim women. In contrast, Ghoufran turned into a happier and more loving woman after being given an abaya and a headscarf. In London, Sabira's brother Soleil was just an ordinary 17-year-old Pakistani boy. He was determined to go to Syria after picking up a leaflet at a dawah preaching stall managed by a small extremist group, al-Muhajiroun.

The writer takes us to the different phases the thirteen women experienced throughout their path of destruction. Most of the thirteen women were initiated with naivety and pure intention to seek spiritual comfort or fulfil their curiosity about their adopted religion. Each has their personal motivation, respectively, to strengthen their religious faiths. What can go wrong with being pious, and what will happen if they unconditionally follow the prophecies to fight the injustice for their own people? The militants usually target vulnerable women, naive teenagers, or young girls who are poor or with troubled family backgrounds. They manipulated the religion for their personal benefits with various tactics such as the deaths of Muslims and planting the guilt on the targeted group for not doing anything for the injustice of their own people. To convince the target to take the bait further, they will build a sense of heroism to make them feel great about being a martyr and following God's order.

Of course, the most common hatred seed they planted on these vulnerable Muslims is Western propaganda. "No matter what part of the world, it was unsafe to be a Muslim." Muslim deaths spark outrage, and online ideologues argued that armed insurgency, or jihad, was the only way to defend Muslims against these onslaughts. Their faith was more emotionally charged with political fury against the West than their desire for spiritual awakening. "Everyone claimed an ideology to justify their violence".

Besides focusing on the thirteen women, the journalist also touches on the social disparity between British Muslims and other Asians in terms of academic achievements and employment opportunities due to the UK's old prejudices and systematic discrimination. It also weighs the consequences on the country's citizens due to the political and policy actions influenced by the differences of religious views. The Westerns' perception against Muslims is being weaponised to recruit young people to fight for the militants. There was a balanced discussion of the problems coexisting, Muslims and Westerners, on both sides. The journalist made an essential point about the importance of endorsing Islam religious practices, which sometimes blindsided the parents when their children's behaviour turned into extremists. At the same time, she also highlighted the struggles of immigrants to make a decent living in an unequal economy due to possibly caused by targeted discrimination in the UK. It was hard to believe when she mentioned that one of the UK ministers blamed the Muslims' religious conservatism had indirectly led to terrorism and caused the rise of the far-right in Britain.

I never expected this would be an investigative book, and initially, I was confused with the existence of varying perspectives from politics and history. The insightful reporting with thorough research is worth reading, although the history and politics of the Middle East is not something that I'm familiar with. I would prefer each story be told at one time instead of multiple accounts in every phase. Due to various reports from different women, I tend to forget what happened to them earlier, but I guess the current narrative style is more impactive on the readers.

Journey Under the Midnight Sun by Keigo Higashino

One-Sentence Summary: The death of a pawnbroker drives two young people to…

The Gunslinger (The Dark Tower #1) by Stephen King

One-Sentence Summary: A story of a gunslinger who keeps chasing after the…