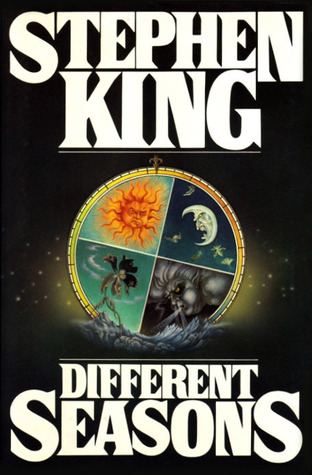 There are four novellas in this book that relate to each of the four seasons - Rita Hayworth and Shawshank Redemption (Hope Springs Eternal), Apt Pupil (Summer of Corruption), The Body (Fall From Innocence) and The Breathing Method (A Winter'sWinter's Tale).

The narrator, Red, has been in Shawshank prison since he was twenty. He begins his story with a brief explanation of his crime and is given three life sentences. In the Shawshank prison, he is well-known for obtaining any prohibited things for his inmates except guns and drugs.

Andy Dufresne is another long-term inmate and becoming Red's good friend. He is sentenced to two life sentences for the murder of his wife and her lover, a crime that he truly did not commit. Andy was a successful banker and a very self-composed person. Initially, he struggles with his prison life for the first two years but earns protection by exchanging his financial advice with one of the harshest prison guards.

Andy's first order from Red is a rock hammer that he can use to shape the rocks he finds in the exercise yard. The next few orders are a rock blanket and a poster of Rita Hayworth. One day, Andy learns from another inmate Tommy that his cellmate on Rhodes Island had confessed to Tommy that he had killed a rich golfer and a banker's wife. On hearing Tommy's story, Andy believes that this evidence could result in a new trial to prove his innocence. Unfortunately, the corrupted warden, Norton, rejects Tommy's claims and places him in solitary confinement for 20 days.

In 1975, after 28 years in prison, Andy disappeared from his locked cell. Nobody knew about his plan before the escape, and no one knew how he did it until Norton discovered the poster of Linda Ronstadt.

A thirteen-year-old boy, Todd Bowen, finds out that an elderly German immigrant living nearby is a wanted Nazi criminal named Kurt Dussander. Dussander initially denies the accusation but eventually acknowledges his true identity. Todd develops a strong interest in Holocaust and is keen to hear from Dussander about his crimes. He even threatens Dussander that he will report to the authority if Dussander refuses his demands. Todd even forces Dussander to wear a replica SS uniform and march on command.

As time goes by, Todd doesn't realise that his interest is affecting him. Besides performing poorly in school, he is starting to have nightmares and talk to himself. The trip to the memory lane has impacted Dussander as well. He is forced to recall his dark past, which he is eager to forget. Both are tormenting each other as Todd wants to listen to the stories but is haunted by nightmares, and Dussander is worried about being reported to the authority but keen to have someone to talk to. Both exploit each other with threats of nonexistent letters to expose each other's dark secrets and slowly develop a more sinister solution to ease their nightmares.

The Body (Fall From Innocence)

Gordie reminisces about his childhood in Castle Rock, Oregon. At that time, Gordie's brother had been recently killed in an accident, and his parents were too depressed to pay attention to him. Gordie usually hangs out with Chris Chambers, Teddy Duchamp and Vern Tessio at the treehouse. In 1960, Vern Tessio was excited about discovering a dead body and asked his friends to come along to see it.

Vern heard a conversation between his elder brother and his friend about discovering a body believed to be a kid called Ray Brower. Ray Brower has been missing several months, and from the conversation, Vern learns that Ray had been hit by a train. The hooligans who accidentally discovered the body didn't report it to the police because they were driving a stolen car.

The boys come out of a plan to claim the discovery so that they will appear in the newspaper and become famous.

The Breathing Method (A Winter'sWinter's Tale)

The narrator is asked to a mysterious social gathering that he has no idea its purpose. There are no invitations, introductions or memberships. Everyone is free to mingle around and enjoy themselves. The guests will share their stories, and everyone will listen attentively to the storyteller.

On the Thursday before Christmas, the elderly physician Dr Emlyn McCarron tells a story of a former patient, Sandra Stansfield. Sandra was determined to give birth to her illegitimate child, no matter what, despite financial problems and social disapproval. Sandra masters Dr McCarron's unusual (for the 1930s) breathing method to help her through childbirth. However, when she goes into labour and is on the way to the hospital one winter night, her taxi crashes, and she is decapitated. McCarron arrives at the crash site and realises that Sandra is somehow still alive. Her lungs in her decapitated body are still pumping the air as her head, some feet away, is working to sustain the breathing method so that the baby can be born. Will McCarron manages to deliver the infant alive?

One-Sentence Summary: An old car is possessed by its formal owner, transforming…