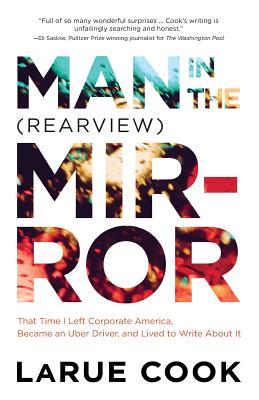 LaRue Cook began driving for Uber and Lyft after leaving his job as a senior editor at ESPN. He started his story with the passing of his father when he was 15. His father's death changes his perspective on human relationships and reexamines the existence of his life.

In his book, LaRue shares some of his passengers' life stories but mostly his views about his existence and his thoughts about his life and the passengers. Sometimes, his opinions about politics and racial issues in America can be complicated, especially if his view contradicts the passenger's opinion.

The book was easy to read, but I guess I misunderstood the title. I thought I would be able to read various life stories of random people like in the book "Confessions of a New York Taxi Driver". I felt his account of his past and personal life are repetitive throughout the book. The story about Uber passengers only takes 30 per cent of the book. The remaining is about his political and social issues views, where he is drinking his coffee, what he is doing at a particular place, and occasionally fills in some quotes from other authors.

I felt harsh to say that his repetitive personal stories had ruined the book. I wish there were more stories about his passengers. I believe other readers will like the book, but unfortunately, it's hard for me to appreciate it as other readers do. I felt I was misled by the title and had a different expectation based on the title.

Partners in Crime (Tommy and Tuppence #2) by Agatha Christie

Tuppence is complaining about her dull life after getting married to Tommy.…