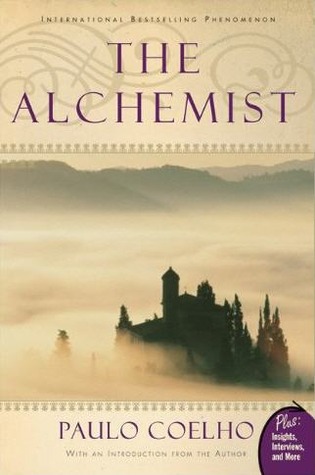 This story is about the life journey of a young shepherd who follows his heart to search for his dreams. Although it's a simple story but it delivers a meaningful message to the readers to pursue our dreams without any hesitations.

This book is worth for reading and gives us a lot of good advices especially for those who has hesitations and fears to pursue their dreams. Here are some of my favourite quotes from this book:

What is a personal calling? It is God's blessing, it is the path that God chose for you here on Earth. Whenever we do something that fills us with enthusiasm, we are following our legend. However, we don't all have the courage to confront our own dream.

The path of the personal calling is no easier than any other path, except that our whole heart is in this journey.

The secret of life, though, is to fall seven times and to get up eight times.

When someone sees the same people every day, as had happened with him at the seminary, they wind up becoming a part of that person's life. And then they want the person to change. If someone isn't what others want them to be, the others become angry. Everyone seems to have a clear idea of how other people should lead their lives but none about his or her own.

"It's this: that at a certain point in our lives, we lose control of what's happening to us, and our lives become controlled by fate. That's the world's greatest lie."

People say strange things, the boy thought. Sometimes it's better to be with the sheep, who don't say anything. And better still to be alone with one's books. They tell their incredible stories at the time when you want to hear them. But when you're talking to people, they say some things that are so strange that you don't know how to continue the conversation.

"People learn, early in their lives, what is their reason for being," said the old man, with a certain bitterness. "Maybe that's why they give up on it so early, too. But that's the way it is."

"If you start out by promising what you don't even have yet, you'll lose your desire to work toward getting it."

He was sure that it made no difference to her on which day he appeared: for her, every day was the same, and which each day is the same as the next, it's because people fail to recognize the good things that happen in their lives every day that the sun rises.

'The secret of happiness is to see all the marvels of the world, and never to forget the drops of oil on the spoon.'

He still had some doubts about the decision he had made. But he was able to understand one thing, making a decision was only the beginning of things. When someone make a decision, he is really diving into a strong current that will carry him to places he had never dreamed of when he first made the decision.

"Because I don't live in either my past or my future. I'm interested only in the present. If you can concentrate always on the present, you'll be a happy man. You'll see that there is life in the desert, that there are stars in the heavens, and that tribesmen fight because they are part of the human race. Life will be a party for you, a grand festival, because life is the moment we're living right now."

"When a person really desires something, all the universe conspires to help that person to realise his dream," said the alchemist, echoing the words of the old king.

"It's not what enters men's mouths that's evil," said the alchemist. "It's what comes out of their mouths that is."

"One is loved because one is loved. No reason is needed for loving."

"Even though I complain sometimes," it said, "it's because I'm the heart of a person, and people's hearts are that way. People are afraid to pursue their most important dreams, because they feel that they don't deserve them, or that they'll be unable to achieve them. We, their hearts, become fearful just thinking of loved ones who go away forever, or of moments that could have been good but weren't, or of treasures that might have been found but were forever hidden in the sands. Because, when these things happen, we suffer terribly."

"Tell your heart that the fear of suffering is worse than the suffering itself. And that no heart has ever suffered when it goes in search of its dreams, because every second of the search is a second's encounter with God and with eternity."

"Everyone on earth has a treasure that awaits him," his heart said. "We, people's hearts, seldom say much about those treasures, because people no longer want to go in search of them. We speak of them only to children. Later, we simply let life proceed, in its own direction, toward its own fate. But, unfortunately, very few follow the path laid out for them - the path to their Personal Legends, and to happiness. Most people see the world as a threatening place, and, because they do, the world turns out, indeed, to be a threatening place."

"Why don't people's hearts tell them to continue to follow their dreams?" the boy asked the alchemist.
"Because that's what makes a heart suffer most, and hearts don't like to suffer."

"If a person is living out his Personal Legend, he knows everything he needs to know. There is only one thing that makes a dream impossible to achieve: the fear of failure."

The alchemist said, "No matter what he does, every person on earth plays a central role in the history of the world. And normally he doesn't know it."

Rating: ★★★★
More reviews can be found on Goodreads: The Alchemist.

After graduated from London University in art history, Adam Woods travels to…