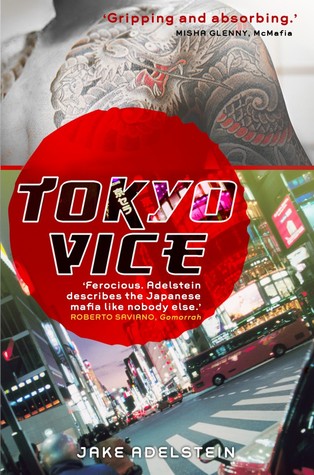 Tokyo Vice is a memoir wrote by an American journalist, Jake Adelstein of his experience as the first foreign reporter working for one of Japan's largest newspapers, Yomiuri Shimbun. In this book, he covers the in-depth look at the Japanese culture along with the dark side of Japan which includes extortion, murder, human trafficking and corruption.

What really impressed me about this book is the author has covered every single detail about Japanese culture including the dark side of Japan without any hesitations. This really makes the story very genuine and no hidden part in it. As for the author, what I like about him are his passions for his work and his courage to strive for the freedom of the press. In order to produce high-quality news content to the public, he talks to anyone to obtain the accurate news even if he needs to communicate with a prostitute or a yakuza. From the book, I've learned that Japanese news media works extremely hard to obtain the first-hand news and they believe that public has the rights to know everything including the seedy side of the country. This is different from certain countries that try to hide their ugly side from their people.

I have jotted down several quotes which I really like from the book:

Sometimes you have to pull back to fight back. Don't give up.

Sometimes it's better to be lucky than good.

I don't know why the fates had been so kind, but I thought I should cover all the bases.

Everything in Japan, even theft, is an art. Even assault is an art - judo, aikido, and kendo, all of these are more than just learning to decimate your opponent, they're about learning to master yourself.

Apparently, not knowing history means never having to say you're sorry.

'You have to have faith in people sometimes, Jake. Sometimes you have to trust people who are untrustworthy. By trusting them, you make them trustworthy.'

'The best people to loan money to are people already in debt. They're so desperate that they will pay any interest rate you demand as long as they can have the cash right away. Once they borrow from us, they'll never be able to pay it back. We own them.'

When lying is part of your job, you forget how love is supposed to work.

'Sometimes in the mountains the animals make paths by using the same route again and again. If you don't know what you're doing, you might think it's a path made by humans – it looks that way. If you follow that path, the path of beasts, you won't get anywhere at all. People lost in the wilderness, they follow these paths and only get more and more lost. Sometimes they lost their way and they die. It's not a path for humans, it's a dangerous diversion. Are you sure thats the road you want to take? It wont get you where you want to go.'

When you drink alone, you know you have problems.

Friendship does not usually include an implicit agreement to become a human target.

It's a weird feeling having an ex-yakuza crime boss light your cigarettes and make coffee for you in the morning.

Rating: ★★★★★
More reviews can be found on Goodreads: Tokyo Vice.

Only 13: The True Story of Lon, Julia Manzanarres & Derek Kent