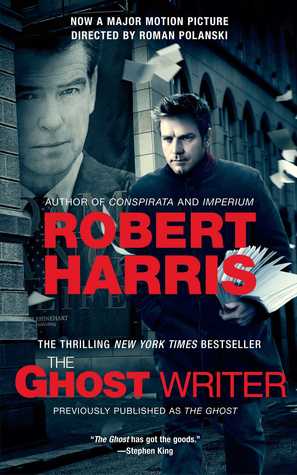 This is a story of a ghostwriter who has accepted a job to write a memoir for a former prime minister of Britain. The first ghostwriter dies unexpectedly and he is being hired for the replacement. He knows little about politics and his past experience lies in portraying aging rock stars, film and sports celebrities. In order to continue the remaining work left from the previous ghostwriter, he is required to join the former prime minister (Adam Lang) in a secure house on a remote place (Martha's Vineyard) where connections to the outside world is not allowed whenever he's working in the house. It's not just the mysterious death of the previous ghostwriter haunts him, but also Adam's past are buried with shocking secrets.

My rating for this book probably affected by the reason of my lacking interest in politics. I personally rated the story a 2/5. For me, the plot is quite good but this book will be excluded from my list of favourite books because I'm not really interested in politics. Besides that, I feel the story is getting draggy and slow. Also, there are a lot of narrator's imaginations being inserted into the story causing distractions to the readers from following the story.

Rating: ★★
More reviews can be found on Goodreads: The Ghost Writer.

Tokyo Vice is a memoir wrote by an American journalist, Jake Adelstein…