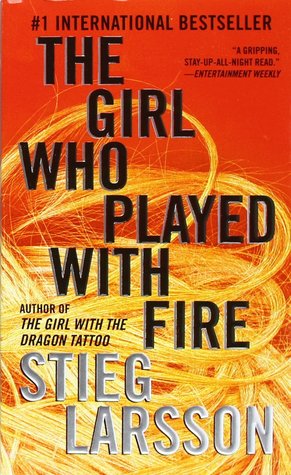 Mikael Blomkvist has decided to publish a story about sex-trafficking operation between Eastern Europe and Sweden. The story seems a common social problem and no one will expect this will lead to the murder of a reporter and a Phd student. The most shocking part is the murder weapon left with the fingerprints of Lisbeth Salander, his best friend who is a troubled but an anti-social genius hacker. Blomkvist purely believes in Salander's innocence. The investigation to prove her innocence compels her to revisit her dark past. Although Mikael feels shock with the new discovery but this increases his understanding towards her.

I still love and strongly admire the character of Lisbeth Salander even though I had read the first book several years ago. The story from the first book might be slightly faded from my mind but my feelings to Lisbeth Salander still never change after I've finished reading the second book. Sometimes, I wish such character exists around me despite many people will categorise her as a dangerous person. I always feel she treats people nicely if that person treats her well whereas the revenge will be doubled if the person treats her badly. She hates men who hates women.

In this second book, Lisbeth Salander is so smart and capable to escape from the police hunt without leaving any traces. She can maintain the calmness and enjoy her life in her luxurious apartment while the whole Sweden is searching for her. She can monitor the entire investigation progress from different people and nobody aware of this. This is so impressive.

If Lisbeth Salander and Mikael Blomkvist do exist in this world, I really wish they will get together in the end. Only themselves can understand each other in this world.

Rating: ★★★★★
More reviews can be found on Goodreads: The Girl Who Played with Fire.

The Girl Who Kicked the Hornet's Nest, Stieg Larsson

This is the final book in The Millennium Trilogy. I wish there…