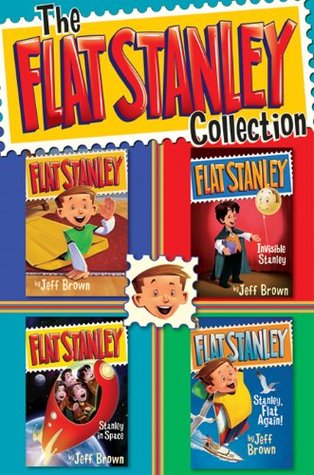 The first story is about how Stanley gets flatten in overnight by the falling of a big bulletin board during his sleep. Since then, he utilises his sliding ability to help others. He helps his mom to get her ring which has fallen into a deep shaft. He also help his neighbour to catch the museum thieves at night. At the beginning, he enjoys his unusual ability such as mailing himself across the country in an envelope, and also flying himself like a kite. In the end, Arthur, his younger brother, comes out with an idea that can change Stanley back to regular shape.

One morning, after a stormy night, Stanley Lambchop appears invisible although his family can hear his voice. Since no one can see him, he needs to hold the string of a balloon so that his family knows his whereabouts. Appearing invisible, he helps a boy to win a bike race, a guy to propose to his girlfriend and even helping the police to catch the bank robbers. Although he is famous and gets the chance to appear on a TV show with his younger brother, he is not happy of being invisible. Will he stay that way forever or is there a solution to change him back to original state?

The President of the United States has chosen Stanley Lambchop and his family to become the first to fly in the Star Scout, a new top-secret spaceship. In this exciting adventure, he will meet the Queen of England and celebrate his birthday with different countries. The most memorable experience is to save a whole planet of aliens from dying of starvation.

One morning, after being hit by a tennis ball, Stanley turns into a flat shape again. With his flat shape, he becomes the spinnaker who helps Mr. Jones to win the sailing race. Before this, he was excited being flat but maybe not this time. He is not happy that he often change shape or invisible. One day, an empty building falls down and his classmate, Emma traps inside. The Fire Chief needs his help to squeeze through those narrow openings to rescue Emma. Does he able to save Emma from the collapsed building? And this time, what will happen that changes him back to the original form?

I finished reading this book within three hours. As an adult who reads this book, I enjoyed reading it. This is a good book to teach children on how to love and care their siblings' feelings. I also learn that instead of feeling sad with what others think about our differences, we should accept and think our differences as a gift.

Rating: ★★★
More reviews can be found on Goodreads: The Flat Stanley Collection.

Albie is a fifth grade boy with academic and social problems. He…

Kyle Keeley is a big fan of all games: board games, word…