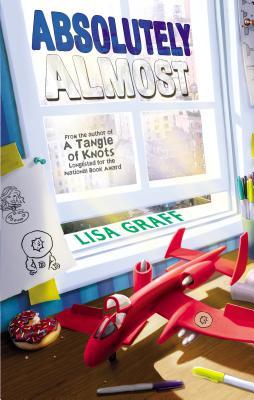 Albie is a fifth grade boy with academic and social problems. He is almost good at many things, but not quite good enough. Although he is poor in many areas but he is a keen observer. Calista, his new babysitter, helps Albie discover his strength and the things in life that makes him happy.

At first, I planned to rate the book 3 out of 5 stars, but I gave an extra star due to the similarity with my childhood. I was an “absolutely almost” kid and I know how Albie feels. When I was a kid, I work hard in everything but I never do well in my studies neither in sports. I was just an average or above average kid. Our parents are quite similar in certain ways. They have high expectations on us. They even will suspect whether we have any disorder problems. I've heard the word “almost” for millions of times in my life since I was a kid. I feel that this book will inspire kids with a similar background.

There are several meaningful quotes which are worth remembering for adults as well. Here is a list of quotes that I love from this book:

"I think you’ll like it, Albie, really," Mrs. Rouse told me, which was what grown-ups said right before they made you do something that stunk.

"You can’t get where you’re going without being where you’ve been."

"You should do something because you love it, not just because you’re good at it."

"Find something you’d want to keep doing forever," she said, "even if you stink at it. And then if you’re lucky, with lots of practice, then one day you won’t stink so much."

The worst thing that happens is always the one thing you thought would never, ever happen.

"Everyone deserves a sad day once in a while," Calista told me. "Sometimes things are too big for cheering up. Sometimes the best way to make things better is just to let yourself be sad for a little bit."

"I think the hard thing for you, Albie," he told me, wiping his fingers off on a napkin, "is not going to be getting what you want in life, but figuring out what that is. Once you know what you want—really, truly—I know you'll get it."

And you couldn’t be anywhere at all without having been almost there for a while.

Rating: ★★★★
More reviews can be found on Goodreads: Absolutely Almost.