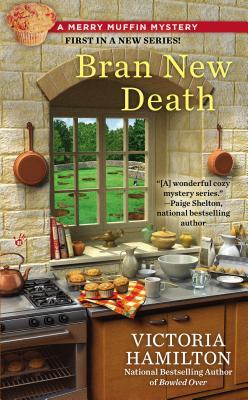 Merry Wynter starts a new life in small-town Autumn Vale, New York, in the castle she's inherited from her late uncle, Melvin. The castle is in poor condition and someone has been digging giant holes on the grounds. She has to stay in the town to ensure the castle back to the well-maintained state before she can sell it.

Unfortunately, Merry soon realises that some townsfolk didn't like Uncle Mel. Local baker, Binny Turner and her crazy brother, Tom, believe that Uncle Mel is the one who has killed their father, and Tom may be the one digging the holes on her land. When Merry found Tom's dead body in one of the holes in her yard, Merry needs to prove she had nothing to do with his death.

There are too many characters involved in the story and I felt a sense of confusion while reading the story at the halfway mark. It seems some of the characters are irrelevant to be overly mentioned in this book. The story is just average for me and I strongly dislike the main character, Merry. I felt she is quite nosy and she seems more curious about other people's affairs than to solve the murder case. Her feelings are mixed up as well. She misses her husband very much and feels he is the best for her but at the same time, she keeps asking herself whether she will find another man as good as him but somehow, jealousy seems exist when her best friend found her love.