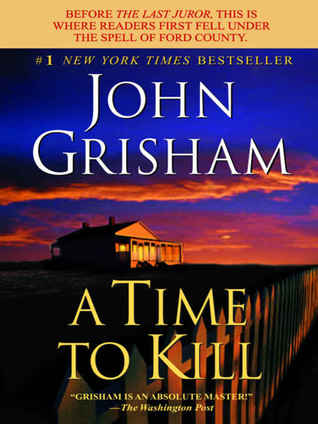 When I was reading the first few chapters of the book, coincidentally, the movie was shown on tv and it was a great chance for me to get to know both versions of the story. I don’t mind spoilers because I knew that usually movies which are based from books are totally different from the original story. Most of the time, I felt original stories are better than movies but this one will be slightly different. Surprisingly, I loved both the movie and the book despite there were a few differences here and there but both were very well-written.

A ten-year-old girl named Tonya Hailey is brutally raped by two drunken young men when she was on the way back from the grocery store. Tonya is later found on the street and rushed to a hospital while the two young rapists, Pete Willard and Billy Ray Cobb are bragging in a roadside bar about their crime.

Tonya’s father, Carl Lee Hailey, determines to avenge Tonya and consults his friend Jake Brigance, a white attorney who had previously represented Hailey’s brother, on whether he could get Carl Lee acquitted if he killed the two men. Jake tells Carl Lee not to do anything stupid but Carl Lee ignores the advice and kills both men with an M-16 when Pete and Billy Ray are being led into holding from their bond hearing.

Carl Lee is charged with capital murder. The major problem in this case: Tonya and Carl Lee are black, and Pete and Billy Ray are white. The story not only focuses on Jake’s work for the case but also involves of how both the white and black communities react on this. Jake receives support and assistance from two loyal friends, disbarred attorney Lucien Wilbanks, divorce lawyer Harry Rex Vonner, and a liberal law student Ellen Roark who has prior experience with death penalty cases. The team also receives some indirect support from Ozzie Walls, a well-respected black county sheriff who gives Carl Lee special treatment while in jail and goes out of the way to assist Jake and in any way he legally can. Carl Lee is prosecuted by Ford County’s corrupt district attorney, Rufus Buckley, who hopes that the case will boost his political career.

At the same time, Billy Ray’s brother, Freddy, seeks revenge against Carl Lee from the help of Mississippi branch of the Ku Klux Klan (KKK). The KKK attempts to plant a bomb beneath Jake’s porch, attacks Jake’s secretary and kills her frail husband, and burns a cross in front of Jake’s house. On the day the trial begins, a riot erupts between the KKK and the black residents outside of the courthouse and this ends up the death of the KKK’s leader. The KKK shoots at Jake one morning as he is being escorted into the courthouse, missing Jake but seriously wounding one of the guardsmen assigned to protect him. They continue to burn crosses throughout Clanton and even burn down Jake’s house.

Despite several setbacks at the start of the trial, Jake never back down in the case. However, things are not going as planned. With unfavourable jurors and the dark secret of their psychiatrist is being revealed during the trial, will Jake able to save his client’s life and also to protect his career?

Rating: ★★★★
More reviews can be found on Goodreads: A Time to Kill.