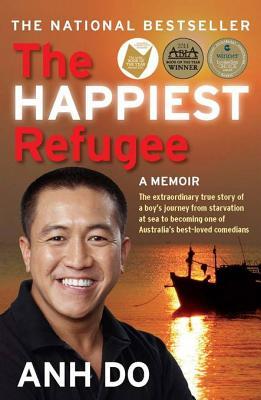 Anh Do is one of the famous comedians in Australia. He shares to us about his life’s journey with his family as refugees in Australia and also the inspirational story of how he ditched the offer to work in a law firm and opted to take up comedian instead.

I’ve forgotten since when I knew about Anh Do and the existence of this book but I remember that I’ve added this book in my reading list probably around the year 2010 to 2012 when I was doing my postgraduate studies in Sydney at that time. It has been in my list for several years but I never got the chance or the time to read it. Sometimes, I've forgotten about it. The funniest thing is after I migrated to Australia since 2015, when every time Anh Do appears on the TV, it’s like an automatic reminder for me to read his book and this time, I finally made it.

Reading this book is like riding the waves of emotions. I’ve never experienced this before in any books that I’ve read so far. You will think a lot about your life after reading this book. There were lots of various emotions kept exchanging as you read further. At one point, I felt like I wanted to cry when I was reading something sad or a touching story but when I went to the next paragraph, I felt funny when the family turned those sadness or difficulties into a funny joke and I felt happy when every time there is something good happened to them. Probably that is the happiest family in the world despite their financial difficulties and the family is way much happier than lots of billionaires in the world. Also, it’s very rare to have such a strong family bond nowadays.

When I was reading the first chapter, I felt Anh’s father is a well-respected man despite the prologue indicates the different side of him. It’s always heartbreaking when someone that you loved and respected the most, has a different side which challenges your tolerance, forgiveness and the dilemma exists between the combination of all those and love.

I felt sad and wanted to cry when they were in an overcrowded boat and attacked by pirates twice. At a different point, I felt happy and wanted to cry when they were so happy and grateful when they received a bag of clothes. Although they were poor, the family always feel content with the simple life. I felt extremely touched when Anh’s parents taught them to do as much as they can to give back to this great country and to give back to others that are less fortunate. As an immigrant in Australia, I have the same thought as well. I felt very grateful that I can live in such a great country and content with what I have right now although we are not rich.

As an Asian who comes from a multi-racial country, racism is not something uncommon in my life. I should consider myself lucky that so far , I never face any racism issues in Australia but there’s one part I agreed with Anh. Probably I have the same attitude towards racism, the “used to it” with kind of “brush it off” attitude but it seems most of the time, the locals strongly despise about it as they are the victims of racism and not us.

I liked to read every part of this book especially stories related to Anh’s mom. She is an amazing woman. What a sweet, understanding, caring and loving mom she is. She can be everyone’s idol or dream mom. She never scolds her children and always have full of faiths in them. Sometimes, she is funny and cute. I’m wondering whether there are some people around Anh that feel jealous of him of having such a great mom.

The love story between Anh and Suzie was so beautiful. The journey from the moment they met was incredible. The never changing love which has seeded inside them for long time but they only get together later. There were so many funny, touching and unforgettable moments such as:

I guess it’s not only his friend has the jealousy towards Anh’s achievements, I think most of us feel the same as well despite we know it was a difficult journey to achieve that much and come to this far. It makes me start to think whether I should ditch my IT degree and pursue to do something that I love to do, just like Suzie :)

This is a book that will make you think a lot and start to ponder about your life. It’s a very inspirational and influential book.

Rating: ★★★★★
More reviews can be found on Goodreads: The Happiest Refugee.

Yoshino Ishibashi is an insurance saleswoman. When she is found strangled at…