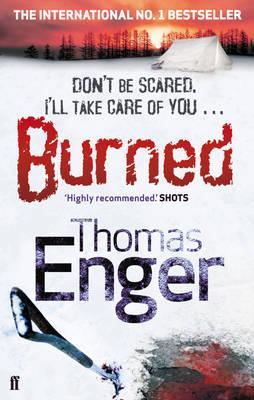 Henning Juul is a crime reporter and returns to work after a long break due to a fire in his flat that killed his six-year-old son. The fire not only left him a scar on his face, it also ended his marriage as well.

On his first day, a young college student has been murdered – buried up to her neck and stoned to death in a tent. The most obvious suspect is her Muslim boyfriend, as they had an argument before the murder. The police also found some text messages which seem to indicate that the victim is being unfaithful to him. There are rumours that the murder is an honour killing and everyone suspects the murder is related to Sharia or Hudud punishment. Henning believes the boyfriend is innocent and wants to find the real killer. As the investigation continues, Henning finds out that the murder plan has a lot of similarities with the film script written by the victim.

Most of the readers felt so sympathetic to Henning Juul, thanks to the author who created such a realistic character. I wish that he will meet someone or a chance of reconciliation with his ex-wife which I hope that it would happen in the next few books. I loved how the author portrays him as a person who is good at problem-solving and possesses a strong analytical skill. Despite of his inner struggles with the past, he still able to prove that he can do the work and determines to find the killer.

I loved how each character was given a very detailed physical description which makes the story very realistic as you can picture every of them in the real world. The novel was easy to read although some of the words seem misused or the sentences didn’t make sense due to the translation.

This crime story is slightly different from the typical ones especially when the author included some humours in the sub-story. I liked how the author tries to "poke" or "tease" the character – Detective Inspector Bjarne Brogeland, a married policeman who often has sexual fantasies every time when he meets his colleague, Sergeant Ella Sanderland.

There were several plot twists even towards the ending of the story. The ending was an unexpected one which I didn’t even realise I was reading on the final chapter.

Rating: ★★★★
More reviews can be found on Goodreads: Burned.

Forget You Had a Daughter, Sandra Gregory