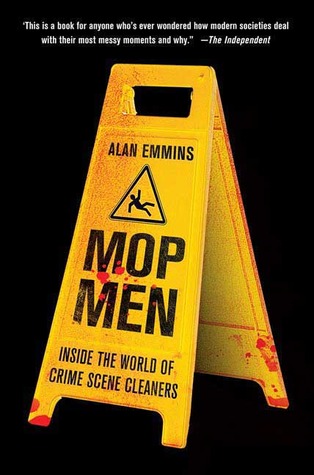 This book tells the true story of some of the cases handled by Neal Smither and his crew who works as a crime scene cleaner that specialises in after-death situations: cleaning up blood and the smells left by decaying bodies.

This book was not what I expected. It was rather disappointing considering the idea was a great one. I would prefer the entire book consists more stories related to the Crime Scene Cleaners. If there aren’t enough stories for the book, I’ll prefer the author just cut it short and rather to have an interesting story which stays within the scope than to read a lengthy book with out-of-scope content.

The book was interesting in the beginning but when it reached to the middle of the book, the direction of the story was diverted more to the author’s personal thoughts. It would be nice if the author places his personal story to a different book and this book just focus with Crime Scene Cleaners.

This book was hard to get in any libraries but when I found it in a neighbourhood library, I felt disappointed that this book wasn’t what I was hoping for all these time. This is one of the books that I’ve read which the author has ruined his own book with his personal story taking over the scope towards the end of the book.

Rating: ★★
More reviews can be found on Goodreads: Mop Men: Inside the World of Crime Scene Cleaners.

Patrick Davis is experiencing problems with his marriage and work. In addition…