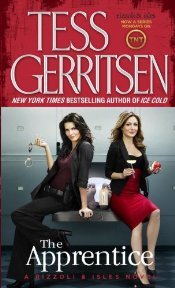 A series of shocking crimes occurring recently in Boston, which involves wealthy men are made to watch while their wives are brutalised. A sadistic demand that ends in abduction and death.

The series of crimes have the similar pattern with the serial killer Warren Hoyt who is still spending his jail time. Once again, Detective Jane Rizzoli needs to confront another killer who acts under Hoyt’s influence. Besides that, she has to face the challenge to work with Special Agent Gabriel Dean, who knows more than he will tell.

The character Rizzoli in the book is overly ego, neo-feminist, and often feeling insecure and inferior inside but always wanted to hide them in front of others. It was extremely frustrated when others sincerely expressed their concerns and caring but she sees them as doubting her capabilities and as usual, she feels the reason is she's a woman. I understand that the author wants to portray her as a tough policewoman who works in a male-dominant field but I believe there are better ways to build her character which can make her as a role model or more likeable.

I was slightly disappointed towards the ending when the author tries to bring Gabriel Dean and Rizzoli to be closer than a colleague which I felt another murder to the story. It was so unnecessary. Why they can't just maintain the same distance from the beginning until the ending? It made Rizzoli looks like a lonely and desperate woman. Why there must be something happens between her and her colleague, as if she can't maintain her mind clear enough to be professional?

Rating: ★★★★
More reviews can be found on Goodreads: The Apprentice (Rizzoli & Isles #2).

During their time with Korosensei at the class pool, he reveals his…