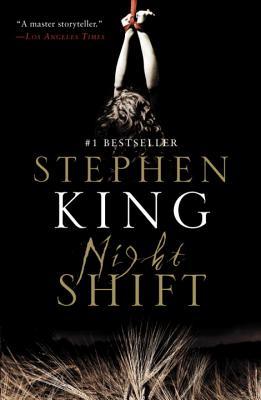 In a series of letters addressed to “Bones”, the story describes the arrival of Charles Boone and his manservant, Calvin McCann, at Chapelwaite, the neglected ancestral home of Charle’s estranged late cousin, Stephen. While running errands, Calvin finds that many people in the nearby town think them mad for being willing to live in the mansion. According to them, the house has a history of sad events, disappearances, and mysterious noises.
Rating: 3/5

A young drifter named Hall has been working at a decrepit textile mill in a small town in Maine when the foreman, Warwick, recruits him and others to assist with a massive cleaning effort. The basement of the old mill has been abandoned for decades and a rat empire has been built there. The animals have been evolved into a strange and varied combination of creatures such as armored rats, albino, weasel-like rat, bat-like rats; and a cow-sized queen rat with no eyes or legs, whose only purpose is to endlessly breed more rats.

Loved the story about the various breeds of rats.
Rating: 5/5

The story follows one evening on a place called Anson Beach, with a group of teens, survivors of a catastrophic virus called A6, that has wiped out virtually the entire population.
Rating: 2/5

I Am the Doorway

A crippled ex-astronaut experiences a terrifying change after being exposed to an alien mutagen during a space mission to Venus. The change takes the form of numerous tiny eyeballs that cover his hands. These eyeballs act as the titular “doorway” for an alien species, allowing it to see into our world, which the man perceives, it fears and hates intensely.

An industrial laundry press machine which believed has been possessed by a demon after a series of unfortunate coincidences.

Loved the story where an unexpected object can be possessed by the demon.
Rating: 4/5

A man comes to the psychiatrist’s office and tells the story about the “murders” of his three young children. His first two children die mysteriously of apparently unrelated causes when left alone in their bedrooms.
Rating: 3/5

A drunkard who has been slowly transforming into an inhuman blob after he drank a “bad” can of beer.

Loved the creativity of this story that a human can turn into an unexpected creature after a can of beer.
Rating: 5/5

Renshaw is a professional hit-man. When he opens a package which delivered to his penthouse apartment, the toy soldiers are alive with working copies of weapons, jeeps, and helicopters.

Loved the author’s imagination when soldier toys fight with the human.
Rating: 4/5

This story is about a group of strangers find themselves trapped together in a freeway truck stop diner after semi-trailers and other large trucks are suddenly brought to independent life by an unknown force and proceed to gruesomely kill every human in sight.

Sometimes They Come Back

Several years ago, two brothers, Wayne and James, are walking to the library when they are attacked by a gang of local greasers. Wayne is beaten to death, but Jim manages to flee. After so many years, Jim becomes a teacher and works at the local high school teaching English. After the Christmas holiday is over, Jim learns the news that one of his best students was killed and a new student named Robert Lawson is now in his class. Since then, several of his students are dead and new students join in. All new students bear resemblance to the greasers who murdered Wayne.

I loved the part when human tries to follow weird instructions from books and sacrifices certain things to fight against demons.
Rating: 3/5

An unnamed narrator recalls the memories of a time about eight years previously when he was at New Sharon College. Several students were murdered during the strawberry spring and a few suspects have been mistakenly arrested during that time. Thick fog was always a perfect cover for the serial killer. The investigation was made more difficult by the fearful panic of police officers, security guards, and the students. No legitimate suspects were found.

I have to admit that I didn’t pay much attention when reading this story. The story seems like typical murders happen in a college BUT the ending changed my mind. I love the ending. It sent chills down my spine.
Rating: 3/5

A cruel criminal overlord intent on exacting revenge on Norris, who has been having an affair with his wife. If Noris is able to circumnavigate the titular 5-inch ledge surrounding the multistorey building which houses Cressner’s penthouse, he can have Cressner’s wife, along with twenty thousand dollars, no strings attached. If he refuses to take the bed, he’ll be framed for heroin possession and never see his lover again.
Rating: 2/5

This story is about a machine that mows the lawn by itself while a strange naked man follows behind the mower, eating the grass.

Richard “Dick” Morrison, a middle-aged smoker, runs into Jimmy McCann, his old college roommate at the airport. Jimmy who was a heavy smoker has recently stopped smoking, recommends Richard a firm called Quitters, Inc which has been helping him to kick the habit. A month later, Richard decides to go to Quitters, Inc. He is introduced to Victor Donatti, who will be his quitting counselor. Later then he realizes the methods are shocking and his freedom will be lost for the rest of his life.

Speechless. I don’t dare to imagine how the world will look like if this “secretive” method being used in our real life to quit smoking or to lose weight.
Rating: 3/5

I Know What You Need

A popular, college-age girl named Elizabeth Rogan meets an unexpected attraction from a guy named Ed Hammer, Jr., whose paranormal ability to perceive what will make any person happy has not resulted in his own happiness.

Spooky enough. I think I will remember this story every time when someone knows me too much. It’s debatable and I’m wondering whether there are girls out there who rather have the guy and prefers not to know what he did for the rest of their life.
Rating: 4/5

Children of the Corn

A married couple accidentally runs over a young boy who ran onto the road. Burt discovers the boy’s throat had been slit and decides to go to Gatlin, an isolated community to ask for help. As Burt explores more about the town, later he realizes that a gang of children dressed in Amish-style clothing and armed with farm tools has surrounded the car.
Rating: 3/5

The Last Rung on the Ladder

Larry is burdened with deep guilt and regret after discovering that his estranged sister Katrina, has committed suicide. He recounts their childhood memories when they had a game where they would take turns climbing to the top of a very tall ladder in their barn, and leap off into a huge haystack.
Rating: 2/5

The Man Who Loved Flowers

An unnamed man is wearing a light grey suit and looks like he is in love. He stops at a flower vendor and he buys flowers for a girl named Norma. When he sees a woman in an alley, he calls her name but the woman denies that her name is Norma. She then sees a hammer in his pocket and opens her mouth to scream. The man kills the woman because she isn’t Norma, just as he has done five times previously.
Rating: 4/5

One for the Road

Several years ago, Booth and his friend, a bar owner named Herb Tooklander, attempted to rescue the family of a motorist named Gerard Lumley, whose vehicle had become stranded in Jerusalem’s Lot. It is widely known that “the Lot” is a dead town but they still decide to save his family. Instead, they barely manage to save themselves from the man’s wife and daughter, who have been turned into vampires.
Rating: 5/5

The Woman in the Room

A story about a man burdened with deep remorse, pain, and inner demons which concerns his decision to euthanize his terminally ill mother with painkillers.
Rating: 1/5

Rating: ★★★★★
More reviews can be found on Goodreads: Night Shift.

Escape from Camp 14: One Man's Remarkable Odyssey from North Korea to Freedom in the West, Blaine Harden

I always interested to read anything which relates to North Korea. Probably…