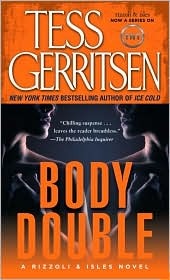 The story begins with a prologue which involves a girl called Alice, taking a test in school but got distracted by her classmate, Elijah. Everyone seems giving her a cold shoulder except Elijah. He earns her trust and she follows him back home to see his Science project. From kitty to a skeleton in seven months. How long will it take for a human?

Maura is in Paris for a week to attend a conference. When she returns home from the airport, there are police cars on the street in front of her house and everyone is shocked when they see her. Later she only realized the victim in the car is a mirror image of her.

Rizzoli suspects that the main target will be Maura. Maura has a public job testifies homicide trials and appears in the newspaper. The victim has a resemblance to her and was shot in front of her house. The main target could be Maura. The incident leads Maura to search more about her past for all the questions which surfaced since that day.

This book has an amazing prologue. Spooky! I've never read such a great prologue which really grasp my attention so well. What a great opening!

This is the best story in this series so far. Probably it's because the focus is on Maura and not Jane. I don't have to read more about Jane trying to prove her capabilities to the men. However, it seems she has a softer side when she's pregnant. I hope her personality gets better in the next story.

This volume begins about Korosensei's past, way before the moon was destroyed…