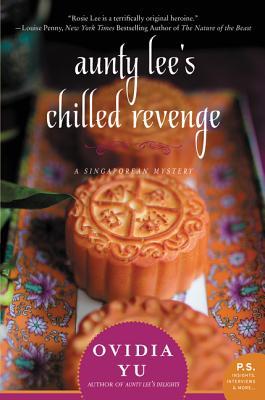 Rosie "Aunty" Lee looks grumpy and has to force herself to sit still in her Peranakan Cafe after she had twisted her ankle. Aunty Lee is not only famous throughout Singapore for solving several murder cases but also her jars of Aunty Lee’s Shiok Sambal and Aunty Lee’s Amazing Achar.

Josephine, Cheril's friend was in the cafe as well. They never keep in touch since Cherilyn stopped volunteering with the Animal ReHomers. They were joined by Brian, a journalist and a volunteer who used to work at the same place as them. They have an appointment to meet up with Allison who hired an American lawyer to file a lawsuit against them for breaking up her marriage.

It started a few years ago when Allison adopted a puppy but wished to return it back to the shelter after that. Instead of waiting for the puppy to be collected by the volunteer, the puppy had been put down by the vet across the road. Later, Allison accused them of attacking her and filed a lawsuit against them and the police for harassing her.

While they were waiting for Allison's appearance in the cafe, Brian made a phone call and received the news of Allison's death.

During the investigation of Allison's death, another murder happens which involves a vet, Dr. Kang. Are there any connections between these two murders?

The entire story is to investigate the murder of Allison Love and focuses on her sister, Valerie Love's stories about Allison.

The story will be probably more interesting if the story includes more of Nina's involvement. I loved Aunty Lee using food as metaphors to describe her feelings or the complexity of the situations. However, I felt the previous two stories were better than this one. The questions were repetitive and there was a lot of beating around the bush in this story.

The Man in the Brown Suit (Colonel Race #1), Agatha Christie

The narrator, Anne Beddingfeld begins her adventure story with the introduction of…