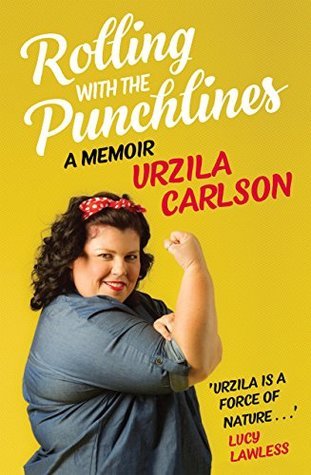 The prologue shares the experience of Urzila Carlson's first comedy gig in a bar in Auckland, New Zealand. In the book, she tells us the story of her upbringing in a complicated family but her positive personality never get affected at all. Within the complicated relationship among the family members or the older generation, there were so many happy and memorable childhood stories that she still remembers until today. She also mentioned the apartheid and the history of South Africa and of course, the famous Nelson Mandela.

Throughout the story, she always very appreciative to anyone who is kind and nice to her. In the story, she also tells us the part of how she takes the courage to tell her mom about her sexual orientation and her opinions of others' perception about homosexuality. That was a great piece of advice when she mentioned some gay people yelling 'discrimination' when someone treated them badly because of their bad behaviour. In recent years, not only gays but it also applies to different genders, skin colours, nationalities or anyone who is avoiding responsibility for their own shit behaviour. Like what she mentioned, gays yelling 'discrimination' and saying 'You're being shit to me because I'm gay!' and her response is 'No, they weren't. They were being a shit to you because you were being a total asshole.' I wish I have the courage to say that to others face to face. Nowadays, people are more sensitive and they always overlook their shitty behaviour and blaming everything on discrimination. Sometimes, I just want to tell them to look up the word 'discrimination' in the dictionary before yelling the word without knowing the real meaning of it.

Why I choose her? She is probably more widely known in Australia or probably in New Zealand but as for me, she is one of my favourite comedians in Australia. I love her positivity, energy, and her sense of humour with the beautiful smile. Her jokes always come in a natural manner and she never trying too hard to make you laugh. She frequently appears on the tv show 'Have You Been Paying Attention' and I doubt I will ever know her if I never watch that show. She's always hilarious, expresses her opinions confidently and she doesn't care what others think of her. Her loveable personality makes me wonder whether there is a chance for me to know the other side of her.

After reading this book, I realised that she is someone who is very considerate and always concerned whether her words are offensive. The beautiful thing about her which I felt funny at the same time is she will express her anger to the person with offensive words but when she cools down, she will feel extremely guilty about it.

I hope she will continue doing what she is doing and wish she will be more famous in the future. She deserves wider recognition.

Rating: ★★★★★
More reviews can be found on Goodreads: Rolling with the Punchlines.

The Elric brothers and Winry arrived at the Rush Valley. Rush Valley…