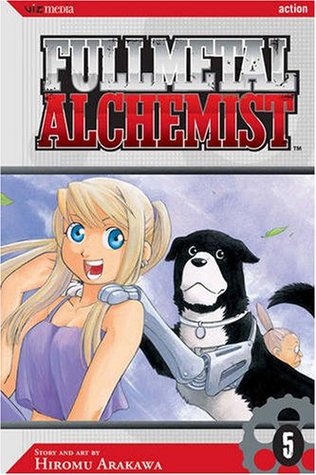 The Elric brothers and Winry arrived at the Rush Valley. Rush Valley is full of advanced automail. The place even holds an arm wrestling contest and limited only to challengers with automail arms.

After a while, Edward realises that his state alchemist ID (a silver watch) has been stolen by one of the locals there. Edward meets the thief at a collector shop and tries to catch her but he can't catch up with her agility and flexibility during the chase.

The thief, Bunny has mechanical limbs for both legs. Winry feels impressed with the mechanical limbs and asks Bunny to bring them to see the maker. The maker, Mr Tommy is a loner but he lives with his son, Lear and daughter-in-law, Sadila. When Mr Tommy looks at Edward's automail arm, he feels the arm is too heavy for his body to support it.

Winry wishes to be Mr Tommy's apprentice but he rejects the request. They can't leave the place until the rain stops. Bunny tells her story of how she possesses the mechanical legs. After hearing Winry's advice, Bunny promised that she will stop being a thief and live to the fullest to repay Mr Tommy who installed the legs on her without accepting any payments.

Not long after that, Sadila is going to give birth. Mr Tommy tries to fetch a doctor but the bridge has collapsed due to the storm. Edward tries to rebuild the bridge but the materials are not enough for such a big project. Mr Tommy has to use a different route but it will take a longer time. In the meantime, Winry decides to ask everyone to work together for the baby delivery instead of waiting for the doctor to arrive.

The baby was successfully born under Winry's and Bunny's help but Mr Tommy still refusing to accept any apprentices. Although we don't know why he is terrified when he knew Pinaco is Winry's grandmother but despite the refusal and the shock, he recommends Winry to go to another skilful mechanic called Jaafar. At the same time, the Elric brothers are leaving to visit their master.

After looking at the changes of their bodies, Master Izumi forces the Elric brothers to tell her what happened to them. The entire story begins with their father's identity, how they became orphans and wanted to revive their mother's life. We also get to know how they meet Master Izumi after she helped to rebuild the collapsed bridge.

Master Izumi left the Elric brothers in an uninhabited island for a month as a training. A knife is their only possession and they need to survive and finds the answer in a month, staying on an island with other wild beasts.

The Elric brothers were left in an uninhabited island. They were not…

Rolling with the Punchlines, Urzila Carlson