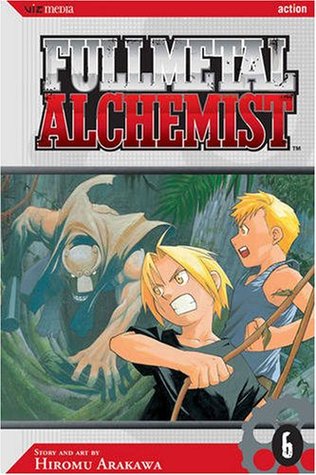 The Elric brothers were left in an uninhabited island. They were not only struggling to find food but also had to fight with the beast to survive on the island.

After one month of staying on the island, Master Izumi finally comes to pick them up. She agrees to train them after they gave the answer to her question which she asked before she sent them to the island.

They return to Rizenbul Village after several months' of training. They try to utilise what they've learned from the training to revive their mother. Unfortunately, things didn't work according to the plan. The failure of the plan also has sacrificed their body parts as well.

The story continues with Colonel Mustang went to Rizenbul Village to recruit the Elric brothers as a national alchemist. The president feels impressed with Edward's skill during the exam. Their age is the main doubt for everyone but in the end, the final decision approved their recruitment. After Edward finishes his story, Master Izumi feels angry with their ambitious action. The reason behind of her anger is because she has the similar ambitious action when she was young. Initially, the Elric brothers want to return to Central after being kicked out by their master. Then, they realised that they should stay back to search for the solution to recover their body back to normal.

On the way back to Master Izumi's house from the library, the Elric brothers meet a strange man who keeps teasing and taunting them. After proving Al is the one with transmuted soul, he leaves the place. This volume ends with a mysterious guy is interested with the Elric brothers and the strange man named Bido is just acting according to his order.

Edward just realised that he has forgotten the state alchemist's annual assessment.…

The Elric brothers and Winry arrived at the Rush Valley. Rush Valley…