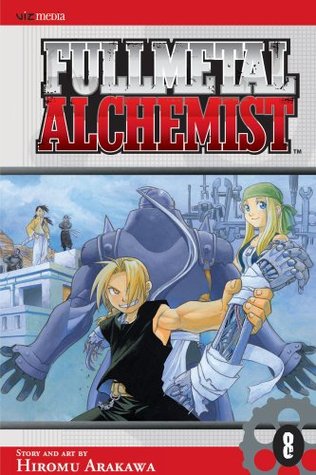 The president also known as Bradley has defeated Greed while Al is hiding in the sewer system with Martel is still staying inside his armour. Roa and Dolcetto are killed immediately when they are trying to save Greed. Martel tries to come out from Al's armour but Al wants to protect her and refuses to let her out. When Martel tries to kill Bradley for revenge, Bradley kills her instantly by stabbing her through Al's armour. Martel's blood upon her death affected Al's blood seal, which allowed him to recover his memories of The Gate, and eventually, it would allow him to be able to perform alchemy without a transmutation circle.

Barry the Chopper should be executed long time ago but now, he is having an armoured body which is similar to Al. Colonel and his team try to question him to prove that he is not an impostor. Barry the Chopper tells them about the fight between him and the Elric brothers at the 5th research institute. The incomplete philosopher's stones were being made there and the ingredients were living humans. Unfortunately, the institute is already destroyed and the evidence is futile. There is a possibility that some high-ranked from the military is involved in this as well. He also reveals about Lust and Envy but when it comes to the physical description of them, it doesn't help Colonel Mustang much. Researchers are being sacrificed to transmute Barry the Chopper's soul in a forceful manner.

Greed is being captured by Bradley and brought to Father's underground lair. Lust reveals to him that Wrath is King Bradley's true identity, created by Father 60 years ago. When Father asks Greed whether he will work for him again, Greed rejects the offer. Then, Father had Greed boiled in a tub of liquid which decomposes his body into his core Philosopher's Stone. The Stone, now in a liquid state and containing Greed's soul, is then consumed by Father.

Meanwhile, at the eastern end of Amestoris, there is a boy named Kayal has saved a girl named May Chen who comes from Shin. When Kayal's father traps in a caved-in mine, May Chen uses her alchemy skill to save his father. After hearing the story about the Elric brothers especially Edward, she leaves the town with the hope to meet the Elric brothers to learn about alchemy from Edward.