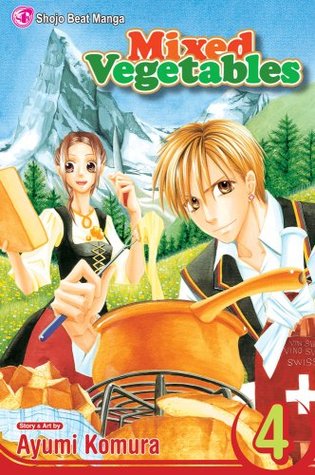 Hyuuga's mother doesn't want Ashitaba to work so late and asks Hyuuga to walk her home. When they reached home, Ashitaba's father gives him a box of pastries to show his appreciation of taking Ashitaba as an apprentice in his restaurant. Hyuuga challenges Ashitaba in peeling daikon radish. If he wins, he will get a lot of pastries from Ashitaba, but if Ashitaba wins, he will tell her why he wants to become a pastry chef. Feeling that she needs to gain his trust instead of forcing him to tell his story, she accepts the challenge which will be held in a week. The judging condition will be based on the length of the peel and also the appearance.

Ashitaba comes to the restaurant to practise her peeling skill. After she told Hyuuga's father about the challenge, he offers her some advice but insists not to help her since this is a competition and prefers her to "steal" the technique. However, he demonstrates the skill while chatting with Ashitaba and she is surprised that she does it so well this time after looking at Hyuuga's father's demonstration. After a week, Ashitaba wins the challenge and Hyuuga is shocked that she can master it so well in such a short time but feels guilty when he sees Ashitaba's injury on her hand.  Ashitaba doesn't really care about the result of the competition. She just wants to know why Hyuuga wishes to become a pastry chef. Hyuuga tells her that he hates pickled mackerel and sour fish, but he likes sweet tarts and pastries.

Ashitaba's teacher, Matsuzaka comes to their house for a family visit. When she appears at Hyuuga's restaurant, she is shocked to see Saki is working there. Ashitaba and Hyuuga feel surprised that they have known each other. Before Matsuzaka appears, Saki told Ashitaba that he used to have a crush on his high school teacher and now they know the teacher that he meant was Matsuzaka. Saki seems to have lost control of himself after seeing Matsuzaka. Saki tells them about the past between him and Matsuzaka. Initially, he wasn't interested in becoming a chef, but when he saw her in culinary school, he felt it was love at first sight. He studied hard to get good grades to impress her. When he was offered to a college, he came to Hyuuga for the celebration, and he was impressed by the beautiful sushi. Because of that, he asked Hyuuga's father to take him as an apprentice. His decision wasn't well accepted by his family and Matsuzaka, but he stood firm with it. After hearing the entire story, Hyuuga and Ashitaba want to help Saki to solve the problem. Before they can continue the conversation with Matsuzaka-sensei about Saki, she warns them not to mention that name again.

Ashitaba and Hyuuga force Saki to go to the school to confront with Matsuzaka-sensei. They lock him in Matsuzaka-sensei's office so they can resolve the conflict between them. Matsuzaka feels ashamed to see Saki because she feels guilty of deciding Saki's future whereas Saki understands Matsuzaka's good intention for his future. She is amazed at Saki's crafted flower and promised that one day, she will come to the restaurant to taste his sushi.

Meanwhile, Ashitaba is curious why Hyuuga's mother is so eager to bring more customers to the restaurant. Hyuuga's mother is in debt with her late father-in-law who was very supportive of her when she was young and pregnant before she married. She wants more customers to come to the restaurant so they can taste his sushi which the skill has already passed to his son. She and the husband used to hope that Hyuuga is the one who takes over the restaurant, but after Saki's existence, they don't mind if Hyuuga doesn't want to take over the business and he can choose to do what he wants to do.

I See You, Clare Mackintosh