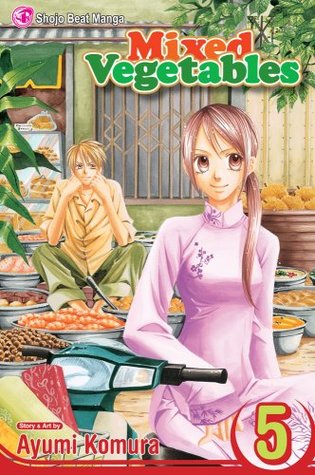 When Hyuuga asked by his mother whether he will take over the sushi restaurant, he agrees to take responsibility for the takeover. It confuses Ashitaba, but Hyuuga's intention for the takeover is for his late grandfather. Hyuuga has decided to give up his dream as a pastry chef which causes Ashitaba feels guilty that she can pursue her dream and at the same time, she feels useless that she can't help him like how he helped her.

Hyuuga reveals to Ashitaba about his close relationship with his grandfather. He wanted to tell his grandfather that he has a different dream, but his grandfather has high hopes for him to take over the restaurant. He never got a chance to tell him the truth before he passed away. After Hyuuga reveals his feelings and the reason behind of the takeover, they promise to go through the same path together. Although they wish to keep their relationship as a secret, Saki finds out and breaks the news to the family. Hyuuga's mother is thrilled with it, but Hyuuga's father doesn't share the same opinion and prefers Ashitaba to break up with Hyuuga.

Although the conversation turns into a joke, it seems Hyuuga's father is serious about the breakup. However, this doesn't demotivate Ashitaba to manage both at the same time. She will continue to train herself to be stronger so that she can become a sushi chef and also can prove to Hyuuga's father that her relationship with his son doesn't cause her to be slacking off.

Meanwhile, Hyuuga's mother doesn't allow them to enter the restaurant for a week due to their final exam is coming soon. However, they insist on managing both work and studies at the same time. Ashitaba even promises that if she fails in the exam, she won't come back to work in the restaurant anymore.

It isn't easy for them to manage so many things at the same time. After realising that Hyuuga always need to walk her home and he needs to walk back to his home, she chooses not to return to the restaurant until after the exam. When they reached Ashitaba's house, her father tells her that his assistant has appendicitis and he needs Ashitaba's help for the preparation for the bakery shop tomorrow.

When they are studying for the final year exam, Hyuuga will be helping out at the sushi restaurant while Ashitaba will be working at the pastry shop. The day before the last exam, a customer wants to order a wedding cake for her friend's wedding which occurs on the next day. Due to the mistake in the order, the customer has been looking for different bakery shops to accept such urgent request. Although the last exam will be held on the next day, Ashitaba offers to help her father to make a croquembouche wedding cake for the customer.

At first, Ashitaba is doing well in the exam but due to…