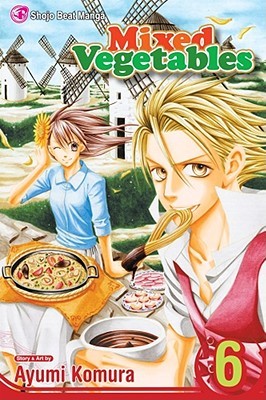 At first, Ashitaba is doing well in the exam but due to the urgent help was required in the bakery shop, she performs poorly in the last subject of the exam. Any required subject which scores less than 60 is considered a failure. Due to her earlier promise, she has to bid farewell to Hyuga's parents and won't be working in the sushi restaurant anymore. To make her stay, Hyuga proposes to her so that she can work in the restaurant but his proposal is ignored by Ashitaba, and also, Hyuga's age is not legal yet to get married.

Meanwhile, Ashitaba couldn't go home because her parents thought that she is working at Hyuga's restaurant. She doesn't want her father knows that her failure is because she helps her father to finish the croquembouche for the customer. She doesn't want Maezawa knows as well. Unfortunately, she bumps into him at the playground and has to tell him everything. This also leads to Maezawa to ask her to work together with him in her father's pastry shop.

When they return to the pastry shop, Ashitaba's father is surprised that Ashitaba returns home early. Maezawa tells him everything about the promise and the exam failure. In the beginning, Ashitaba's father didn't understand why she failed in the exam, and later he remembers about the customer's order which occurred on the day before the final exam.

Coincidentally, Hyuga's regular customer, Okamoto-san comes to the restaurant, and he tells them that his daughter's wedding was yesterday. The cake order was mixed up the day before the wedding, and luckily, Ashitaba's pastry shop willing to made one for them. Although Ashitaba wants to hide the truth from Hyuga, Hyuga's family got to know the truth through Okamoto-san's story. While Ashitaba's father is advising her about her current situation, Hyuga suddenly comes to the house and tells her that his mother wants to see her.

Following her father's advice, Ashitaba tells them how she feels and pleads Hyuga's mother to let her stay in the restaurant. At the same time, Hyuga's mother reveals to her that they knew about the cake and the truth behind the exam failure. She couldn't let Ashitaba leave without knowing the truth and makes Ashitaba promise that she can handle both work and studies at the same time. Also, Hyuga takes back his proposal and promises her that he will make a proper proposal to her when the right time comes.

The summer vacation has arrived. Ashitaba wants to go to the beach with Hyuga, but when Matsuyama asks for help, she invites him to come along so that he can spend time with Ichii as well. Before she leaves, Maezawa passes her a box of pastries to give to Hyuga as an appreciation for his help when Maezawa was not around. When she tells Hyuga about it, he isn't happy with all the things going around especially when Ashitaba talking to him about another guy.

Maezawa comes to the sushi restaurant and lashes some blunt comment about the price. He also requests explicitly for Hyuga to make sushi for him and Hyuga accepts the request despite that day is his first day of training. Maezawa criticises Hyuga's sushi and also reveals that his initial plan is to take Ashitaba to go to France. However, after coming to the sushi restaurant on that day, he feels relieved and promises that he will come back again.

Every year, Ashitaba's pastry shop will be closed for a week, and…