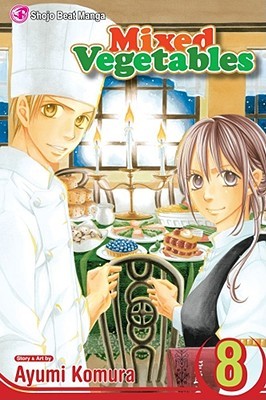 When Hyuuga returns to home from France, he tells Ashitaba about her father's offer to go to France to learn how to make pastries. Unfortunately, Hyuuga turns down the offer as he had promised his grandfather that he will take over the restaurant. Ashitaba confronts Maezawa after hearing what Hyuuga has told her. She reveals that she knows that the experience of pastries world in France will be an excitement for Hyuuga but at the same time, she knows Hyuuga will return home because of the promise to his grandfather.

Although Ashitaba feels terrible about her selfishness, she really doesn't want Hyuuga to leave her. She tries her best to avoid any chances that Hyuuga will leave her, but she knows he is still thinking about the opportunity to go to France. As Maezawa mentioned to her before, she will feel the pain as time goes by. So, she chooses to break up with him and forces him to choose between his desire to become a pastry chef for her or his desire to become a sushi chef for his grandfather.

After the conversation with Ashitaba's father, Hyuuga borrows Maezawa's kitchen to make pastries, and he tells his parents about his decision to go to France to become a pastry chef. He even tells them about the grandfather's wish about the takeover but clarifies by Hyuuga's mother that the grandfather doesn't want anyone to live with regrets of unable to do anything for him.

Eight years have passed. Ashitaba has been a skilful sushi chef, and Hyuuga has opened a shop where Ashitaba's pastry chef used to be.

The story didn't go well, and it was getting duller towards the end. Every volume is like playing tug of war between realising their dreams, but at the same time, it keeps repeating that they can't because someone that they loved will not be happy with what they want to do. They keep thinking about the disappointment of their loved ones even before they reveal to their loved ones about their wish. So, they just keep thinking and keeping inside that they can't realise their dreams because of others, but at the same time, they want to achieve it. I guess this can be considered as a love story, but I don't feel the story is romantic at all.

In summary, everyone wants to do something for others, but at the same time, they want to realise their own dreams, and everyone is trying to fit those contradictions into their perfect world. What a waste when the story has a good beginning, and the story will be better if there are more positivity and challenges that they need to overcome to achieve their goals. Also, it will be more interesting if the story less focusses on adults' wishes as well as their "romantic" relationship. A big disappointment for me as I was so eager to read this manga before this.

Every year, Ashitaba's pastry shop will be closed for a week, and…