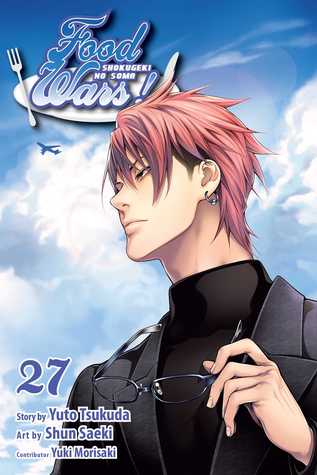 This volume begins with the judges going to taste the six dishes that the contestants had cooked for the second round of the battle between the Central and the Rebels (Food Wars!, Vol. 26: Shokugeki no Soma - 2nd Bout, Yuto Tsukuda, Shun Saeki & Yuki Morisaki).

The judges are indulging into the specific sushi created by Subaru. The combination of the smoky fragrance and the texture difference has given greater depth to the taste for the sushi. As for the ramen, Megishima serves a separated crimson paste accompanied with the ramen. The crimson paste called harissa, a seasoning originated in North Africa which consists of paprika, caraway seeds, lemon juice and garlic. The soup base of the ramen is Muamba chicken, a stew also of African origin where chicken and nuts simmered with tomatoes. One of the judges is impressed with the uniqueness of African ramen, and the addition of harissa has expanded the spice and savouriness as well as the generous quantity of peanuts in the soup.

Meanwhile, Kuga who is specialised in Szechuan cuisine has served the sweet and sour pork dish made with black vinegar. Anne, one of the judges who doesn't look thrilled about it at first has changed her mind after tasting the dish. The combination of balsamic vinegar and Subaru's smoked soy sauce which also elevates the flavour of green tea has strongly impressed the judge. The dish which also consists of French sauce surprises everyone, but at the same time, they are amazed at Kuga's technique which is something out of his specialisation.

Although the judges were impressed with their dishes, unfortunately, the Rebels team experiences a crushing defeat. However, although the Central has won the round, the three contestants from the Central are totally exhausted after the battle. They need a day of rest before they can compete again.

The second day of the regimental shokugeki begins. The Rebels team sends their three first-year students; Soma, Megumi and Takumi Aldini will fight against the Central. For the first card, Soma will be facing Saitou Soumei. Aldini will be facing Eizan Etsuya on the second match. As for the third match, Megumi has to fight with Akanegakubo Momo who is a top-tier patissier.

Megumi tries to calm herself down after receiving criticism during the introduction of the match. A flashback story shows how she learned from chef Dojima and Joichiro, and the most unexpected is chef Shinomiya will be one-on-one training with her before the battle.

Soma will be cooking a rice dish, and Saitou will be serving Kaisen Don with butter as their main ingredient. However, their ingredient preparation has confused everyone when Saitou is extracting orange juice and Soma is cooking mochi with boiling soy milk.

Takumi starts working on his main ingredient by sauteeing the thinly-cut beef in sesame oil. Everyone is expecting that he will be cooking beef shigureni, a beef dish cooked with ginger but Takumi takes it into a different level. Once Eizan knows what Takumi is going to serve to the judges, he goes back to the warehouse to get another ingredient. His secret ingredient can change a person's taste receptors and fool their taste buds with an illusion. Anything that the person eats after that will taste sweeter than before. Eizan serves his roast beef to the judges before everyone. He predicts the loss of Takumi as Eizan's dish consists of the vital ingredient that changes the judges' taste bud. This will only affect their judgment on Takumi's food because their taste bud will only be able to recover after that.

This volume ends with Eizan's confidence is shaken when his assumed victory is being denied by Takumi's assurance of his winning in the match.

Story of a Soul: The Autobiography of St. Therese of Lisieux, Therese de Lisieux

"Because your soul is extremely simple, but when you will be…