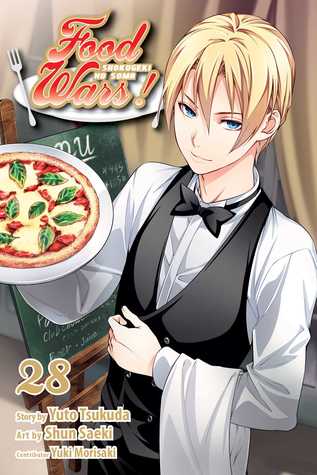 Eizan feels confident with his pre-determined victory but shaken by Takumi's confidence of his winning dish (Food Wars!, Vol. 27: Shokugeki no Soma - 3rd Bout, Yuto Tsukuda, Shun Saeki & Yuki Morisaki). This volume begins with Takumi's dish, a pizza with half beef shigureni and the other half with plain cheese. Takumi requests the judges to start with beef shigureni despite everyone's prediction that the judgement will be ruined by their taste buds after Eizan's strategic dish. Suprisingly, the judges feel the pizza tastes superb. Takumi reveals the secret ingredient that he has incorporated into the pizza dough as well as his success of tracing Eizan's thoughts throughout the match. Eizan is still in shock after being told that Takumi has been observing him from the beginning and Eizan's choice of using artichoke in his dish also has been under Takumi's prediction as well. Takumi's ability to trace his opponent's thoughts has gained the first winning for the Rebels team on the 3rd bout.

The next judgement dish will be from the third card, Megumi and Momo. Momo serves her rose-shaped apple tarts to the judges. Her apple tarts with rose flavour are placed into an edible fruit basket. The judges' praises to Momo's dish did not deter Megumi to give all her best for the competition. However, when she serves her dorayaki to the judges, the simplicity of her dish raises the eyebrows of everyone, doubting the ability of the dish to match up with Momo's apple tarts. The dough which uses apple butter is one of the greatest ingredients in the dorayaki and Megumi was being trained strictly by chef Shinomiya. Although the judges are impressed with Megumi's unusual technical skill and the excellent taste of the dorayaki, she only earns one vote out of three judges, and this means that the victory goes to Momo.

Meanwhile, Saito has prepared to serve his jewel butter seafood bowl which consists of salmon meuniere with squid liver saute and soy sauce-pickled salmon roe. A flashback tells the story of Saito's life in protecting his family's sushi restaurant and the hardship that he endured as a teenager when his skill was underrated in the sushi world due to his age.

Soma finally serves his dish, fragrant butter pilaf which stuffed into fried tofu and the judges can't wait to taste it. Due to Mimasaka Subaru's ability to trace his opponents' skills, he suggested having a mock competition with Aldini, Megumi and Soma on the night before the match. This also leads to another flashback of Soma's first day in the school and how he hones his skill every day and reaches this far for such battle.

The 4th bout will be starting in 90 minutes. The Rebels team needs to choose who to compete for the next round. They had predicted that the opponents will be Akanegakubo Momo, Kobayashi Rindou, and Tsukasa Eishi. The ending of the volume doesn't reveal many details of the contestants except the 1st card will be Momo is going to face Nakiri Erina.