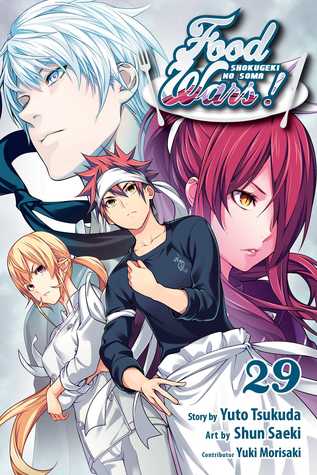 The 1st card for the 4th bout has been revealed in the previous volume (Food Wars!, Vol. 28: Shokugeki no Soma - First-Year Brat, Yuto Tsukuda, Shun Saeki & Yuki Morisaki). Momo's bad mood and unexplainable irritation doesn't discourage her from the determination to win the match. The theme ingredient for their match is muscovado sugar.

Momo is being more intense than usual. She finishes her competition dish which is a fairy tale castle built with roll cakes and cute illustrations. The cuteness and the taste of the roll cakes had won the judges' hearts. In response to her opponent's roll cakes castle, Erina serves the judges with meringues shaped into souffle. The judges later only realise that the dish is a dorayaki after they find out that the red bean paste is sandwiched between two pastries. Momo isn't amazed at Erina's dessert, but Erina insists Momo tries her dish. Erina's dessert will be the answer for Momo's unsettled feelings since the previous match against Megumi. Momo can't hide her love with the dessert, and one of the judges reveals that the secret ingredient which increases the depth of the flavour is the yoghurt strained by Erina using the coffee filter. The name of the dish is Souffle Leger de Grace and 'Grace' in French means 'blessing' (Megumi literally means 'blessing' in Japanese).

Erina explains to Momo about her superb sense in creating exceptional dishes which caused her not to acknowledge Megumi's difference which can produce a high-quality dish. Erina understands her feelings as she experienced the same situation before this when she met Soma. Momo who always thought cuteness only exists in things that she approves, but she has to admit her defeat in the end after tasting Erina's dessert.

The 2nd card for the 4th bout will be Satoshi Isshiki versus the first seat of Elite Ten, Tsukasa Eishi. This will be a massive challenge for Isshiki as the theme ingredient is wild rabbit and rabbit meat is not a common ingredient in Japanese cuisine. When he chooses a soup bowl to serve his dish, this causes great concern to his friends as they wonder how he is going to incorporate a strong stink ingredient into a soup, one of the most refined and delicate dishes in Japanese cuisine. His success of creating such an exquisite flavour of soup has gained the admiration of Kinokuni who always jealous of his abilities without putting much effort in learning it whereas she has to work tremendously hard to catch up with him since they were young.

While the judges are tasting the soup, Isshiki reveals that his determination to continue cooking is because of Kinokuni. Isshiki has a strict family, and as the eldest child, he needs to bear the burden of taking over his family's Japanese restaurant. He has been trained in strictness since he was a kid, and all the hopes have been laid on him. He doesn't understand the joys and emotions of cooking until he met Kinokuni at her lodge. The happiness in polishing one's skills through flavours which he can see from Kinokuni's face has taught him to experience those feelings that he never felt before that.

In the meantime, Eishi serves the judges with a French noble dish which gains a lot of praises for his genius idea in producing such a creative and outstanding dish. The final card of this showdown will begin soon but interrupted by an unexpected guest, Azami who suddenly appears to give an announcement of a change in the judging panel for the final match. Since it is against the principle to have a single person as a judge, Azami has invited two first-class WGO officers to be part of the judges.

The last card's main ingredient is spear squid. Takumi who has received a piece of advice from Megishima a few hours ago before the match, leading him to keep observing Rindou's cooking. Both serve their dishes at the same time. The 4th bout has ended with the win for Rindou and the two chefs remaining on each side will be competing tomorrow for the 5th bout.

Senzaemon announces the next match will be the final battle of this Regiment de Cuisine. Two chefs will be cooking together at the same time to prepare a two-course meal. There is no theme ingredient for the match, but the two-course meal must be a true gourmet.

Out of the Forest, Gregory Smith