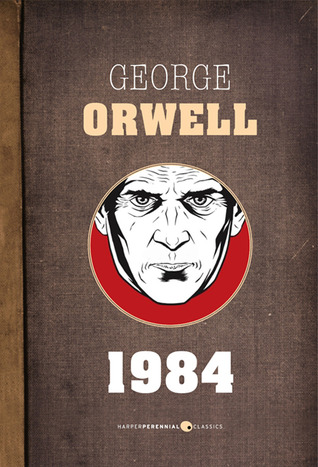 "It was terribly dangerous to let your thoughts wander when you were in any public places or within a range of a telescreen. The smallest thing could give you away."

Winston Smith works in the Ministry of Truth, returns to his apartment and begins writing a diary to express his rebellion to the Party. In his diary, he writes about the war film that he watched the day before. When Winston looks down, he only realises that he has written "DOWN WITH BIG BROTHER" over and over again in his diary. He has committed thoughtcrime, and he knows that the Thought Police will seize him sooner or later.

The arrest always at night and sudden. There was no trial, no report of the arrest and people just disappeared and following with the name removed from the registers,  and every record of everything the person had done was wiped out. Eavesdropping children or 'child hero' denounced its parents to the Thought Police if they overheard some compromising remark.

Winston updates Big Brother's orders and Party records so that they match new developments and destroys obsolete documents. The process of continuous alteration applies to every kind of literature or documentation. The past was brought up to date to show that every prediction made by the Party could be explained by documentary evidence to have been correct.

Proles have more freedom than the Party members, but they take it for granted because of their ignorance and lacking intelligence and awareness of the oppression. Winston keeps searching for the past to validate what the Party said about the current life is better than before the Revolution. Struggling with seeking the truth of the past and also the suppression of his rebellion, Winston's life is going to change when one of his female colleagues whom he suspected is a political spy slips him a note with the message 'I Love You'.

The story was very descriptive with the environment surrounding the main character. It begins with Winston's observation around him, and the author describes the details of Winston's surrounding, which indicate the depression and lacking freedom when living under a totalitarian government. Police patrol snooping into people's windows, telescreen exists in every house which can pick up any sound above the level of a low whisper, posters of BIG BROTHER IS WATCHING YOU is everywhere, every movement is scrutinised by the Thought Police and children reported their parents' thoughtcrime to the Thought Police.

I can't believe what was written in this book, which was dated in 1948, still exist in this era. What I've read about this book such as children betraying their parents and every movement is being scrutinised were similar to what I've read about North Korea from the book 'Without You, There Is No Us: My Time with the Sons of North Korea's Elite' by Suki Kim. They are no longer have the intellectual capability to differentiate between truth and lies, and sometimes they confused what to believe, and to the extent, they lie to themselves. In the book '1984', the Party claimed that they invented the aeroplane. This claim is similar to the North Korean leader, telling the people that he created the burgers. The similarities were shocking. It's like a reality version adapted from this book, and this book was written in 1948. I'm still speechless after what I've read, but I think that I finally have an answer if someone asks me what book I've read so far had changed my life. It was intriguing to the extent that there was one point, I was confused with the reality and thought I might get caught of reading this book. Somehow, I felt my mind was being messed up by the author as I continued reading this book, as if I'm Winston and the author is O'Brien, and this is 'The Book'.