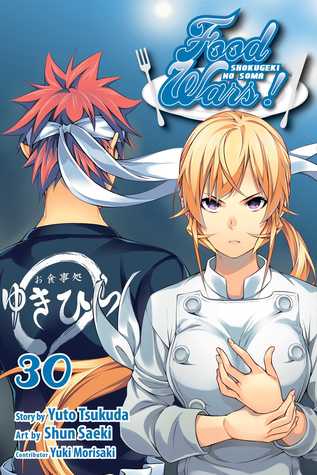 The final battle of the Regiment de Cuisine will be a two-course meal served in sequence by each team. The team that wins the match will take every single one of the Elite Ten seats for themselves. If the Rebel team wins, they can save their friends from the expulsion. Tsukasa Eishi will be cooking the main dish, and Kobayashi Rindou will be preparing the appetiser.

The story leads to a short flashback of Tsukasa's daily workload as the first seat of the Elite Ten. Although he is not a sociable person, he will do anything for the sake of cuisine perfection. He received a lot of compliments from customers, but he feels annoyed with their praises and Azami criticised his food as horrible when they met for the first time.

Rindou creates exquisite layers to form a mushroom mille-feuille stuffed with duxelles. The duxelles consists of formic acid extracted from the ants and the astringency stimulate the appetite of the judges. Tsukasa applies the salt-crust baking technique which envelops the deer meat. Before Erina and Soma serve their dishes, Azami is confident that the victory will go to the Elite Ten.

After Soma tasted Tsukasa's dish, he realised Tsukasa finally had shown his speciality which he never revealed in their previous battle. Soma feels this is his time to show his real speciality as well. Since Azami mentioned that Erina is their 'key' due to her God Tongue, Soma asks Erina to taste his dishes. By using Erina's God Tongue, he can tune its flavour and heighten the level of his dish, which he can't achieve on his own. The judges are impressed with his clever tricks and several surprises contained in the meat.

Although Soma's dish is impressive, it has derailed the entire meal as he doesn't think of teamwork. He never considered whether his dish would work well with Erina's main course. Soma's confidence in his dish leads him to challenge her. She has to prepare a new dish within ten minutes with Soma's help although she came into the realisation that she doesn't have any specialities. Erina uses Soma's bizarre cooking as part of her style, and their non-sensical approach creates a perfect combination two-course meal.

Although Azami disagrees with his daughter's cuisine ideology, his body couldn't reject the reaction to the deliciousness of the dish prepared by Erina. The final result of the Regiment de Cuisine is clear, and everyone accepts the result.

This volume is the biggest disappointment for me since I started reading this manga. Probably the lowest rating I ever gave comparing with all the previous volumes of this series. I couldn't believe what I've read and why it suddenly became so lame when the story was quite good at the beginning. The story was quite dull and unacceptable when it comes to the part of Azami's reaction towards delicious food. What?? Why?? Can't he react differently?

Fate! It can stab you in the back any time, upsetting the…