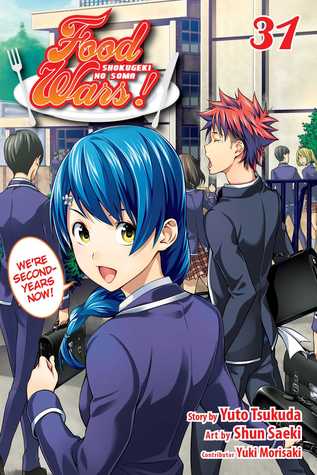 The winner team of the Regiment de Cuisine is the new Elite Ten in Totsuki Culinary Academy. They start to discuss who will take the first seat, but the headmaster is testing the sole candidate for the first seat. Senzaemon Nakiri has decided to retire and looking for someone to take over his work. The candidate has suggested Erina since the Nakiri family has filled the position for generations.

After four months have passed since the regimental shokugeki, they've become second-year students in the academy. Many welcomed the birth of the new Erina administration, although some starts to question whether Totsuki should remain in the hands of the Nakiri family. Meanwhile, Soma has created an unwritten rule within the academy. Rejecting a shokugeki is a dishonour to a Totsuki student. Anyone can freely challenge anyone to polish their skills.

Megumi and Soma are assigned to go for a business trip to a specific prefecture's hot spring town. An old traditional Japanese hotel has been operating for over 100 years and has a strong tie with Erina's grandfather, the former headmaster of Tootsuki. However, this hotel suddenly shut down a few days ago without any warning. The neighbour is telling them that the sudden closure of the hotel has caused some regular customers to stay in another hotel. The unexpected closure of the hotel and sudden disappearance of the head chef leads them to investigate further about the mystery case. They ask the residents around the area, especially the hotel's regular customers, but there aren't any clues about the shutdown.

On the next day, another hotel also unexpectedly shut down its business. Looking through to the Low Cull Hotel's window, Soma finds it weird when the cooking utensils are all gone, and the range hoods were still on. The third incident happens in the hotel that they are staying. The landlady reveals that the culprit is the foreign backpacker that they met when investigating the case. He challenges every hotel's head chef for shokugeki and demanding them to cook the food based on his request.

Megumi believes that she is able to cook a dish which can impress him about countryside cuisine. If she loses the challenge, both she and Soma will be his slaves. However,  when Megumi prepares a kid's meal with curry to the foreigner, everyone is shocked. The foreigner later finds out that the dish is not a curry. It's his homeland's food, gumbo which originates from South America. Megumi's observation and her knowledge have taught her to create a heartwarming dish which he has been looking for all this time.

They begin to tell a story of a large banquet with countless mafia families, and several noirs are employed, but there was one who conquered that entire party. His plate was on a completely different level and started to explain to them about shokugeki. The noir had his face covered with a chef's hat and bandana, but when the foreigner mentioned the name of the noir,  both Megumi and Soma is speechless.

When Soma calls his father for more details about the noir invasion, Saiba reveals a huge secret which leaves Soma has more questions than before.

Well, as I continue reading this manga, I can feel that it is the time for this manga comes to an end. The story begins to derail, and it's getting feeble. Please end this manga before it brings more damage to the story. It was a great cooking manga at the beginning. I used to love this manga until the previous volume. It's showing its age, and sadly, it's not ageing well.

Scott Fenney, a wealthy corporate lawyer from a prominent law firm, is…