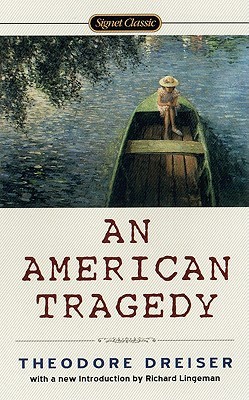 "The difference between the attitudes of these two girls - Sondra with everything offering all - asking nothing of him; Roberta, with nothing, asking all."

Clyde Griffiths is raised by poor and devoutly religious parents to help in their street missionary work. Clyde always struggles with the inferiority of his poverty and also his jealousy for others who own a lot of necessities which he can't afford.

During his teenage years, he begins to think about his direction of life. Unfortunately, he doesn't have many options for him to choose. He realised that his religious parents had sadly neglected their education opportunities, and neither he wants to be a tradesman. He is poor but proud, and he sees himself can achieve more than that. He wants to live in a wealthy life. He despises the idea of wearing old clothes and working in an ordinary job like most people do, which he feels as miserable as his current life.

While Clyde still thinking about his future, his sister Etsa made a shocking move. She runs away from the family with an actor. This increases his determination to leave his family as well, although he is surprised that all these years of religious teachings didn't have any effects on his sister. Clyde finds some menial jobs, and he is glad that his job enables him to avoid the missionary work. However, he still feels unsatisfied with his current financial condition. As he sees all the fancy suits and luxurious lifestyles of his customers at work, he knows that his current pay will not fulfil his dream to become one of them.

Before Clyde is hired as a bellboy, he was fascinated by the hotel's magnificence. He is thrilled with his work, especially with the pay and the ludicrous tips from various types of customers. His observation towards his workmates' lifestyles and the lavish clients at the hotel is his first lesson to learn how to achieve his dream life. Also, with his current paycheck, now he can afford to groom himself like others.

Although Clyde's social circle is expanding, he is still struggling to understand women and relationships. From the first experience to a brothel and later dating a non-conservative girl who is using him to fulfil her material desires, he finds them fascinating yet hard to understand their mind and behaviours.

After the unfortunate accident which killed a little girl during a ride with his friends, Clyde flees away from Kansas City. While working as a bellboy in Chicago, he meets his wealthy uncle Samuel Griffith, the owner of a shirt-collar factory in the city of Lycurgus, New York. Samuel offers his nephew a menial job in a factory. Clyde later being promoted to become a supervisor but warned by Samuel's son Gilbert that he has to maintain a proper behaviour towards the women who works under his supervision.

There are times Clyde was tempted by some of the girls, but he keeps reminding himself the promise he had given to Gilbert. He wants to keep his job and also cares for his uncle's opinions of him. However, due to his loneliness and lacking of friends, he is easily drawn to Roberta Alden, a sweet innocent girl who works in the factory.

He experiences a dilemma between keeping a distance and his irresistible desires for her. Roberta shares the same passion as him, but she aware the differences in their status will be their hindrance. However, an opportunity comes on one Sunday when Clyde is on his sightseeing trip, and Roberta is with her friend on their outing trip at the same place. Despite their anxiousness of being seen by others, they enjoy themselves and hope for another chance to spend time together.

After a few secret meetings, Clyde successfully persuades Roberta to fully surrendered herself to him, abandoning her struggle between love and moral values. Not long after, Sondra (friend of Clyde's cousin Bella) accidentally mistaken Clyde as Gilbert and this creates an opportunity for him to charm her. The meeting reignites his fantasy to live in a wealthy life in the future, especially when Sondra invites him to her friend's party. Not that Clyde knows that he is being used as a pawn to irritate Gilbert who has offended Sondra with his ignorance.

I wondered whether Clyde will treat Roberta the same way if he meets her earlier than any other girls? Will Roberta still has the same ending? The development of the relationship seems like a sinking boat. When the unexpected thing happens, both want to save themselves, and someone will sacrifice the other for his or her own benefits.

I had mixed feelings towards Clyde from the beginning. I felt he has a pathetic life and sometimes seems pitiful. He keeps pursuing someone's life which is something out of his reach. Somehow, he seems lost, and he thought the life that he is chasing is the life which he wants all this time. However, when it comes to the part of his behaviour towards his relationship with Roberta, he becomes selfish and manipulative. He seems revengeful due to his past experience with women which is unfair to Roberta since she is totally different from all the women that he met before. I had a strong sympathy for Roberta, who was torn between her true love for Clyde and her moral values. He keeps pushing her to the edges to fulfil his desire although he has no intention to marry her.

I found the story extremely intriguing, but at the same time, I was struggling in reading the story as well. The details were acceptable but I had difficulty in understanding the long sentences which include several levels of information. A sentence can be turned into the length of a paragraph which requires to be slowly dissected for a better understanding of the context. But once I reread a few times at a slower pace, I found out that it was an interesting way to describe something or the scene. Although sometimes, I wondered whether any other writing styles can express it better instead of a paragraph of long sentences and numerous commas in a single lengthy sentence.

I felt the entire story was captivating, but the ending was too draggy for me. The presented evidence was very solid, and I don't understand why the author was trying so hard to convince the readers with irrelevant details of the arguments between two lawyers for the case. Besides the unnecessary lengthy court scene, the ending also involves another part of extensive religious prayers. I felt the story will be perfect if the ending was straight to the point and lesser author's irrelevant debate about morality, conscience, and his religion's point of view.

Rating: ★★★★
More reviews can be found on Goodreads: An American Tragedy by Theodore Dreiser.

One-Sentence Summary: Maura was trapped in the heavy snow with a group…

"I will fear no evil" While Charlie Campion is on…