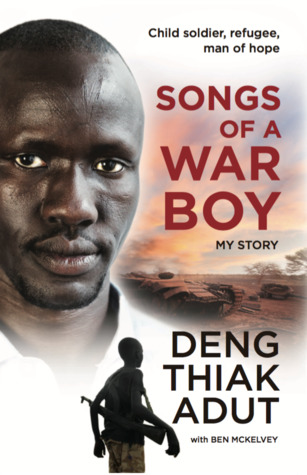 "To appreciate the value of freedom one must first be denied it. To know real fear gives special meaning and yearning to being free of fear."

At the beginning of the book, Deng Adut shares a glimpse of some of his best childhood memories with his family before he became a war boy. He was six years old when war came to his village in South Sudan. Taken from his mother, he was conscripted into the Sudan People's Liberation Army and taught to use an AK-47 before sent to the battle.

He spent most of his childhood life in the soldier camp with other kids similar age as him. As a six-year-old boy, he had witnessed the brutality of execution and also experienced physical abuses, starvation, and illness. At that stage, he wished that he will be killed so that the sufferings will be ended as well. Unfortunately, he has to stay alive and became a soldier to fight in the war. And he was nine years old at that time.

"In our stimulated haze, we could think of, and talk about, nothing but death, valour, glory and the front line. Killing became an addiction that could not be adequately serviced so, for some boys, death became an acceptable substitute."

After a series of intensive war training and lost in a battle with several gunshots, Deng still feeling excited to reunite with his unit to return to the war. However, the "broken unit" was assigned with menial tasks, and the expectation of going back into combat seems will never happen.

Although still missing the life of being a soldier, Deng was rescued by his brother John and smuggled into a Kenyan refugee camp. Travelling hundreds of kilometres to Nairobi and even experienced physical abuse from the enemy, John never gives up in moving to another country. With the support of the UN and help from an Australian couple, Deng, John and his wife Elizabeth able to resettle in Australia.

"I wanted people to understand that no one ever wants to be a refugee. I wanted to explain that we had taken public money in the early days of our resettlement, but that there was no other way to get on our feet, and that once we did we contributed."

Struggling with the new world, Deng doubled up his effort in learning English when he was 14. There were times he felt lost in this new world, but he managed to find the solutions and also with the abundance help of others. Deng had tried Accounting and even considered to study Environmental Science. But in the end, he found his life path in practising law. He becomes a refugee lawyer and now is the co-founder of AC Law Group.

It is still a vivid memory of how I got to know the existence of this biography. It happened when I watched a TV commercial of Western Sydney University (shorturl.at/mruAD), which I've never seen such an inspirational and memorable tv commercial for an educational institute. I did some reading about Deng Adut and found this book. I added it into my reading list since then. But why now I only read this book after so many years in my reading list? This book has the most unique reason that I never experienced before with any other books in my reading list. It's not because I have so many other books to read. In fact, this book has been one of my highest priorities among all other books and recently, I realised that I had added this book in my reading list since 20th October 2016. Also, I just knew that I've been checking the availability of this book from my local library since then. It's rarely available, and I felt so lucky that I finally have the chance to read this book. And I'm so glad that the story didn't disappoint me as well.

One-Sentence Summary: A woman wants to believe that her cheating husband is…

Maura meets an attractive man at the Boston Museum event. The gold…