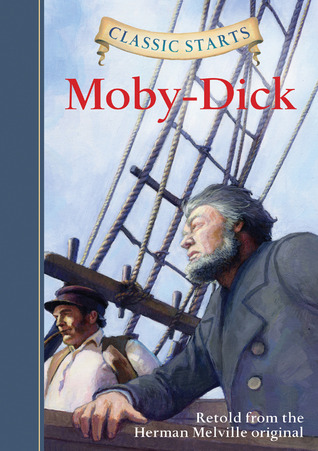 One-Sentence Summary: Ishmael joins the adventure of hunting whales but almost lost his own life due to Captain Ahab's obsession of hunting the white whale (Moby Dick) which he had lost his leg to it.

The narrator introduces himself as Ishmael. He recalls his life a few years ago, looking for a work at a ship, and missing the last boat to the island of Nantucket for fishing for whales. He decided to stay at the Spouter Inn for two days to wait for the next boat to Nantucket.

At the inn, he has no choice but to share a bed with another man who is a harpooner. His name is Queequeg, and he was a native of New Zealand. His face and body were covered in the same tattoos.

The narrator and Queequeg become best friends after that. At Nantucket, they signed themselves to work on a ship called Pequod under Captain Ahab. Captain Ahab has only one leg because he lost the other leg to a whale.

Captain Ahab made an announcement to everyone on the ship. Any man who first sees the white whale for them to catch will win the doubloon. The doubloon is worth of the sixteen-dollar coin. Captain Ahab was in high spirits to capture the white whale called Moby Dick which had taken his leg. Everyone felt excited except Starbuck. Starbuck seemed worried, and he just wanted to hunt for the whale oil, not to hunt for personal enemy.

Then, one sunny, peaceful afternoon was interrupted by shouting. Someone saw the whale. Boats were lowered down the side of the ship. They took turns heading into the pod. Each harpooner had to get close enough to throw his spear. Queequeg tried to throw the spears twice but missed the target. They returned to the ship after the being knocked overboard by the wave caused the thrash of the whale's tail.

This is a fantastic story with the details about whale hunting, the process of cutting the whale and storing the meat and oil, and what a harpooner does. Overall, the main focus of this story is about Captain Ahab's obsession in hunting Moby Dick. There are so much to learn from this story, such as the narrator's first impression about Queequeg because of his tattoos, and Captain Ahab's leadership is the most valuable for us to ponder about. Also, I just knew the opening line of this book is one of the famous lines in the literature world. And the name 'Ishmael' has been widely debated for the symbolism with the biblical character, the son of Abraham. Both are cast out to the wilderness in different ways and both survived miraculously in their adventure.

I never liked this story when I was a kid. Maybe it's because I'm not really into sea stories, and the reason why I enjoyed this story now is that the current version that I'm reading is a lot shorter. I guess it's for youth reading and not the thick book which I saw in the bookstore. I wondered if I should try the detailed version in the future.

It's always a fascinating discovery reading classic literature. The way how the stories being told was so different, and I wish the popularity of this story will continue and not end up in the list of banned books. When political correctness is taking a toll nowadays, maybe animal activists or vegans will have some voices about this book. Perhaps I should spend more time reading more classic literature before it disappears, causing by the human's selfishness and people who are lacking appreciations in literature.

"I thought it was peculiar that the Rachel was out looking for her lost children, but all they found was me - yet another orphan."

Rating: ★★★★
More reviews can be found on Goodreads: Moby-Dick by Herman Melville.

One-Sentence Summary: Three specific children being targeted by a killer for an…

One-Sentence Summary: A woman wants to believe that her cheating husband is…