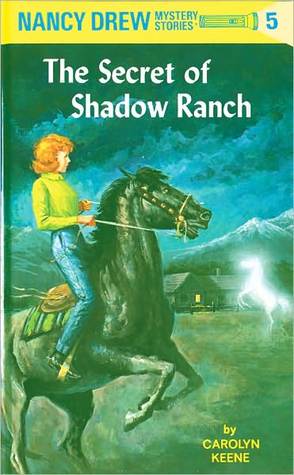 Nancy is going to spend her vacation at the Shadow Ranch with her cousins, George and Bess. When she reaches the airport, they tell her that their aunt and uncle, Edward and Elizabeth Rawley thinks that it's not safe for them to stay at the ranch.

On the night before, they saw a phantom horse running across the meadow. The phantom horse is a curse from a romantic legend which believed will cause destruction wherever it appears. And the next day, Uncle Edward found his windmill had been pulled down. Meanwhile, an old man who heard their conversation leaves them a note telling them to stay away from the ranch.

When Nancy helps an Indian girl to chase away a thief from her shop, she wants to give a watch to Nancy. The watch belonged to Frances Humber given by her outlaw sweetheart. Besides of the watch and the cursed horse, legend also says that Valentine had left Frances a treasure which believed to be hidden at the Shadow Ranch.

I didn't have much interest in the story after reading it halfway. There were times I felt confused with Nancy's assumption or the investigation, but I guess I considered myself that I understand the entire story. I would prefer the story just focus on the treasure hunt as the story itself already complicated enough. But another case about the missing of Alice's father is related to the treasure hunt as well. Also, I guess the continuous switching of locations is one of the reasons that I felt hard to keep up with the storyline.

Rating: ★★
More reviews can be found on Goodreads: The Secret of Shadow Ranch (Nancy Drew Mystery Stories #5) by Carolyn Keene.

One-Sentence Summary: Neighbours stalking each other in a village but one of…