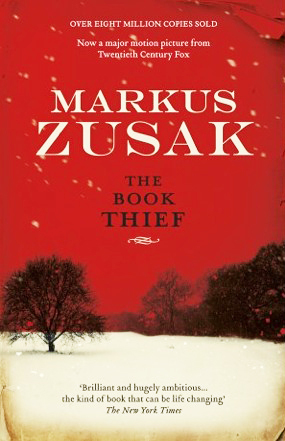 The story is narrated by Death during World War II, and it is the story of a young German girl named Liesel. It begins with the death of her brother and her first act of book thievery. A book is hidden in the snow called 'The Gravedigger's Handbook' which is Liesel's first stolen book at her brother's grave.

The entire story sets during the Nazi period in Germany around 1940s. Liesel lives with the Hubermanns, her foster family that has nothing much to give to her except their unlimited love. In Liesel's life, another important person is Rudy (her best friend) and later Max, a Jewish fist-fighter that they hide in their basement.

What a mesmerising story, beautifully written with a fascinating storyline. The author has also included some wittiness in the story, which increases the livelihood when reading it. I couldn't believe I was quite enjoyed reading the book, especially the unique writing style and the words are so brilliantly used to capture every moment as we travel together with the journey of Liesel's life. I guess I have to borrow from the author for the following words which are better in explaining what I feel about this story:

"I wanted to ask her how the same thing could be so ugly and so glorious, and it's words so damning and brilliant."

I want to ask the author about the same thing.

I like the Hubermanns. Mama and Papa are lovely and interesting. Most of the characters are very colourful, although the setting is during wartime which fills with violence and sadness.

Random thought. My last book about Jewish and German was Anne Frank's Diary. Recently, I only realised there is a Jewish museum in Sydney. I think I'll visit the museum once it reopens. It's worth to understand more about history after reading all these great books (and more to come).

Rating: ★★★★★
More reviews can be found on Goodreads: The Book Thief by Markus Zusak.