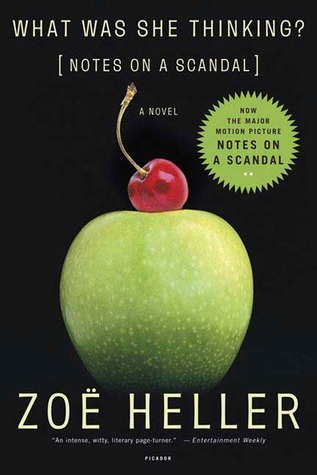 The foreword reveals that the narrator Barbara is staying with Sheba while Sheba is waiting for her trial. Sheba is being charged with indecent assault on a minor after being discovered having a sexual affair with one of her students. The boy was fifteen years old when the relationship began. Barbara starts a project by writing the entire story about Sheba from the day she joins St. Georges as an art teacher.

This story is quite challenging to read, not only literally but also mentally as well. There were so many unusual words which really testing my interest with the story. Sometimes, I just lost what I had read because I have to look for the meaning of those words. As for mentality, it was quite disturbing to read an old woman telling a story of how a middle-aged woman falls in love with a fifteen-year-old boy. I know I should be open-minded in reading this book, but I just need some time to adapt such an unusual storyline.

It's funny when reading about two old women sort of trying to win Sheba's friendship which sounds more like to win her heart for a relationship. Well, I mean what's so special with Sheba to the extent of fighting over her, even when she decides to have minestrone soup instead of lasagna.

Putting aside of all those big words, the author did a great job in creating the character Barbara as an old woman that keeps complaining when jealousy hits her. She seems like a lonely woman who has a keen interest in Sheba for no reason but to fill up her time and curiosity.

I was surprised that the debate of gender inequality was brought up in a journalistic manner. Or maybe the author is trying to portray Barbara's defensiveness for her friend? I feel the debate of how the public views such issue based on gender shouldn't exist in the first place. And using the example of a thirty-two-year-old heir to the British throne engaged to a nineteen-year-old as a comparison seems invalid. I feel confused with this particular part. According to the author, Sheba's case was taken as a joke whereas if the gender is reversed, the narrator will label them as "victim" and "predator". And scientists were brought up about their research involving older men's attraction for younger women is an evolutionary instinct but

"A woman who interferes with a minor is not a symptom of an underlying tendency. She is an aberration. People don't see themselves, or their own furtive desires, in her. According to evolutionary science, an affair like Sheba's is nothing more than a freakish lay-by on the grand motorway of human survival. That's why men in pubs can afford to laugh at her."

The ending of that chapter is the narrator feels there won't be any leniency from the court or Sheba will get "benefits" from the double standard.

I feel the debate of gender, whether a man is being labelled as "predator" and whether a woman's action is being treated as a joke shouldn't exist in this story. It can be written more convincingly but not by throwing "revolutionary science" or using scientists into this matter. Also, a nineteen-year-old is a legal age to get married or engaged (I assumed it's 18 in Britain?) and it's totally unrelated to the gender or age difference. Regardless of British heir or whatsoever, you can't use that as a comparison with a teacher who has a sexual relationship with a fifteen-year-old boy. I personally feel any adults having a sexual relationship with underage teens is equally wrong and disgusting no matter what gender of the person. I think the missing point here is the legal age, and gender equality and age difference were wrongly targeted. Somehow, when I re-read that particular part, I'm wondering whether she confused herself or she confused the readers, or maybe I'm the only one that confused here? I just don't get her point of this unnecessary debate, and I ask myself, "What is the author trying to prove here?". I just don't get it.

Sheba reminds me that type of person who appears at least once in our lives. Someone that is naively dangerous who not only ruining her own life but potentially leading some mess to people around her without her knowledge. You just don't know how to handle such person beside of trying to maintain a distance with her no matter how nice she is. You just don't want to get involved with her naivety and innocence mistake, which she will never understand until the last day of her life. You try to talk sense to her, but nothing can stop her ignorance as she has been blinded with her own feelings.

I don't know what to feel after I finished reading the book. Initially, I thought the story focuses on a middle-aged woman's affair with her fifteen-year-old student, but that was just half of it. Another fifty to sixty percent of the story is about Barbara herself, her depressing and lonely life who desperate for a friend. I'm trying to imagine what if someone who closes to me has been stealthily writing about my life? Although I don't like both (or all) characters in this story, somehow I feel if Sheba has a mother like Barbara, probably her life will be less messy. Barbara is strict and righteous. She can be quite nosy but isn't sometimes that's how we feel about our mother when she cares about us?

Rating: ★★
More reviews can be found on Goodreads: What Was She Thinking?" Notes on a Scandal by Zoe Heller.

On 7th November 1843, Harriet Monckton was found murdered in the privy…

The Girl on the Train, Paula Hawkins

Rachel has a serious drinking problem after the failure of getting pregnant,…