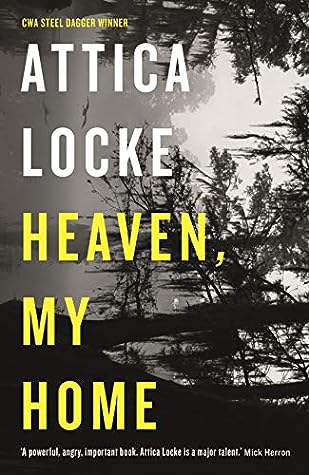 "…when there was no sense of right and wrong when it came to dealing with white folks. There was only survival."

The story begins with briefly revealing Levi's family background, including his relationship with his mother's current partner and his father, who has been not around for quite some time. He is on a boat alone at a lake, but it's getting dark. A sudden noise appears which he hopes that will be his saviour, but everything turns into darkness.

Darren Matthews is trying to break into his mother's trailer to steal the little .38 which he has been suspecting is the murder weapon that killed Ronnie Malvo. Darren's relationship with his mother has never been good. His marriage is slowly re-building, and his career and reputation lie in the hands of his mother, Belle. Now Darren's fate is depending on her, and Mack's future is depending on him. Mack is an elderly black man who had been accused of murdering Ronnie.

After the successful arrests in Lark in the fall, Darren is back to work in Houston joining the Texas Rangers. His boss Wilson assigns him to a case of a missing kid at Caddo Lake in Marion County. The boy's name is Levi King, and he is just nine years old. The situation needs to be delicately handled due to the kid's family is related to Aryan Brotherhood of Texas (ABT), an American white supremacist and Neo-Nazi prison gang which involves in various of criminal activities. The boy's father is serving 20-years imprisonment, and the current partner of the boy's mother is involving various con activities as well. Wilson sees this as an opportunity to dismantle the ABT before the power changes hands in the country. The boy's father is willing to exchange information for the sake to save his son. However, there is a concern for Darren when the place from where Levi is from has racial issues.

Darren feels that he shares the same complicated family background with Levi despite the differences of their races. Hopetown is not a friendly town towards black people, and worse, the boy has a few juvenile records related to hate crime targeting non-white community.

Greg, who is working for FBI and also Darren's best friend, is strongly suspecting that Leroy Page is the killer of the boy. Leroy Page, a black man who owned the land at Hopetown, has experienced several harassments and vandalism from Levi and his friends. And Leroy is trying to sell his land to a property developer and moving out from Hopetown soon although he has a deep connection with his ancestry land.

There are times, Darren is no longer able to distinguish what is right or wrong. He wants to protect his own people as he has seen a lot of injustice and experienced racial discriminations. But sometimes, he is not sure whether the suspect has committed the crime or he is overprotective to the black community.

I feel bad that most of the people in the country keep planting the seed of inferiority into the black people for generations and gradually taking away their confidence as time goes by. And they begin to have doubts with themselves just because of the endless negative views and they slowly accepting the label reluctantly. And I read it somewhere why some black people are less fortunate in their lives not because they are lack of any skills or talents, but it's because their poverty which is caused by the lacking of the opportunity given to them. Their complicated family background and their hardship are usually being viewed negatively are due to the history which also caused by the country's treatment to them since generations.

This story is heavily themed with racial issues which involve white supremacist and the black community. I have to admit that I need to search what is the Aryan Brotherhood of Texas (ABT) is. The pace is slow, but luckily there aren't many irrelevant details that diminished my interest in the story. However, there are a lot of geography and history lessons about the place itself. You have to be patient with the pace to enjoy the story. I don't recommend for those who are looking for a quick read. It also delves into racial discrimination faces by the black community generations ago.

The story can be challenging for non-American readers since we are not familiar with the state's legislation, geography and history but because I have a keen interest in racial issues, this is not a major concern for me. The author pulls off a solid twist, and the short bonding between Levi and Darren is pure and touching. And I can feel the bitterness for Darren to handle the truth about Ronnie Malvo.

I am surprised that I loved the story. To be honest, I was quite sceptical at the beginning because of my unfamiliarity with American culture and history as well as geography will probably hinder my interest. I am grateful that my patience has made me really enjoyed the story, and my knowledge about Texas has improved as well. The story not only touches on the racial divide but also a pinch of politics. What I loved the most is the other side of this story is the strong bonding families, tribals and communities and preservation of ancestral heritage.

Thanks to NetGalley and Serpent's Tail for providing me with a free review copy in exchange for my honest opinion.

"You're a firestarter, honey. Just one great big Zippo lighter."…

On 7th November 1843, Harriet Monckton was found murdered in the privy…