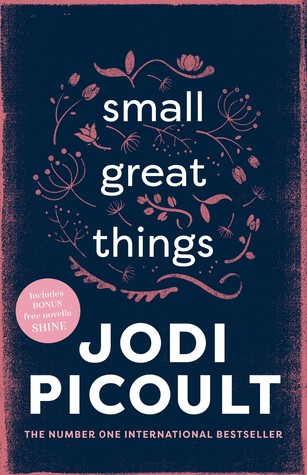 "Justice will not be served until those who are unaffected are as outraged as those who are."
BENJAMIN FRANKLIN

It begins with the story of Ruth's mother, who is working as a maid for a white family. Ruth's mother helps the mistress with the baby's delivery, but sadly, the baby died due to the premature birth. The incident has influenced Ruth to become a labour and delivery nurse.

Ruth shares a few stories of her work and her patients. The story slowly leads to a young mother named Brittany and her fierce-looking husband Turk. Ruth is responsible for examining and taking care of their baby Davis. Turk requested to see her supervisor and demanded to disallow Ruth to hold their baby again.

The story switches the focus to Turk, a white supremacist who begins his story of his brother's death which involved an African American man that he believes is the killer. Although later he realises that the accident was his brother's fault, he still firmly believes that the African American man is guilty and should be put into jail. Turk's brother's death has changed his life and led him to the path of becoming a white supremacist.

The hospital complies with Turk's request, and Ruth no longer in charge of their baby. But on the next day, the baby goes into cardiac distress while Ruth is alone in the nursery. At that moment, Ruth faces a dilemma, unsure whether she should obey orders or should she intervenes? Ruth hesitated before performing the CPR. When the baby dies, she is charged with a serious crime.

This story is told in different perspectives which allows readers able to look into the situation in various angles.

Ruth and Turk were introduced synchronously as their stories were connected to each other. However, Kennedy's introduction seems to totally change into a different direction and style, but no connection was related to Ruth and Turk at the beginning. Her character just suddenly pops up from nowhere. I would prefer her introduction came later when she was hired as the defendant lawyer. Her introduction is like a tv commercial break, appears independently in a sudden manner on the first part.

My personal Opinion Is...

I don't know whether I'm ignorant or over-optimistic when Marie mentioned "for a boy like Edison to be so successful" and Ruth seems offended with it. I felt Ruth is probably a bit sensitive? Marie even hopes that her daughter can be as smart as Edison, which indicates that she treats Edison is equal. At least Marie doesn't say that she expects her daughter should be more intelligent than "a boy like Edison". Maybe she is trying to indicate that Edison achieves such a significant accomplishment in adapting such a challenging environment and perform better than the majority. I don't know, but that's how I feel. Please forgive me if what I felt was offensive to anyone and I hope nobody gets offended with what I said. I never live in the United States, and I don't have much experience in that kind of environment, although I did grow up in a multiracial country and my race is not the primary race in the country.

Another scene is when an elderly woman struggling with the top of the cream pitcher and her purse is on the counter. When Ruth approaches her, the elderly woman holds her handbag tightly. Ruth tries not to get offended by the action and tells herself to shake it off. It seems this is another cook up story to relate to the theme of the book. I guess it's an instant response for anyone when any strangers try to come near you and your purse is on the counter.

However, being in a crowd of majority where you are the minority in that sea of people sounds convincing to me. Although there is nothing wrong being at that place, the feeling of being intimidated and the experience of indescribable uneasiness will spontaneously appear inside.

Is that another cook up story when Christina says that they are lucky to have Ruth's mother as part of their family. I feel she just expresses her appreciation and what Ruth thought of is "family doesn't get paycheck". Well, if they don't pay her mother, that is considered illegal and slavery. But as her mother said, it's an honest job that supports their life. And she can even relate a compliment for her non-aging face to a skin colour or racial issue. What?

Well, I just express my opinions based on what I read, and I don't have the rights to talk about racism issues in the United States. I'm not an American and neither black nor white. My knowledge in this area only comes from books and media. Maybe those scenes are really how African Americans feel every day in America. But as someone neither of those two races, I feel the author seems to create several unconvincing scenes to fit into the theme of this book. Maybe I'm just being nitpicking or preferring more convincing stories to support the issue.

Initially, I don't understand some of the readers' frustrations because I genuinely feel it was a good story. However, as I continued reading it, I started to feel something doesn't seem right. I thought maybe the readers were just feeling angry with the racial issues, but slowly I guess I can understand where the frustration comes from. Besides feeling unconvincing with some of the dramatic scenes, I think I share the same feelings with some of the readers. It's like if you are a non-African American, it's better that you don't touch the racial issue because you really don't know how they feel. You are not them, and you weren't growing up in their environment. You can't think like them, and you can't be like them. You can write stories about white supremacists or maybe racism towards white people (racism can happen to anyone) but not about something out of your life experience.

I understand she has a good intention to convey the message of racism. However, trying too hard with a lot of cook up stories will cause backfire. Unless you have a strong family background or life experience in that particular area, I guess it's better not to try to venture into any unfamiliar topics for whatever reasons. It's like an American Indian trying to write poverty problems in India or a Japanese writing a story of a Chinese during the Sino-Japanese war. Any writers will never ever able to express the feelings for the intended person or hit the bullseye for the theme if the writer never experiences the issue before.

For example, I can express any racism issues or race-based politics which exist in my country because I grew up in that kind of environment. Even after I migrated to a different country, I will never be able to understand how someone belongs to a majority group with special privileges feels.

In another example, To Kill A Mockingbird written by Harper Lee. It was an original and great story. Simple in the sense of less dramatic scenes or trying to convince readers because the story is genuine enough. And the story is based on the author's observations of her family and neighbour, and it was inspired by racist attitudes in her hometown, Alabama. She has a lot of reliable background support which makes her comfortable in writing such a sensitive issue as a white woman. And the story turns into one of the famous novels of all time because the story is real enough.

The Story Is... Miwako has committed suicide. What had caused her to…

"You're a firestarter, honey. Just one great big Zippo lighter."…