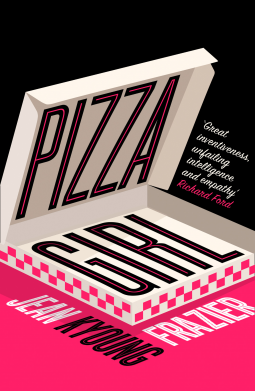 This story begins with the name of the narrator's customer Jenny Hauser who orders pepperoni and pickles pizza every Wednesday. The narrator is just eighteen years old and eleven weeks pregnant at that time working as a pizza delivery girl at Eddie's. The story is gradually revealing bits and pieces here and there about the narrator's family, the pizzeria and Jenny Hauser.

The narrator later tells the story of how she met her partner Billy, and I liked how she reveals her descent through a Korean dish called pajeon. The story continued with the narrator's thoughts about the people around her (especially Jenny Hauser) and her confusion and loss of direction during her pregnancy. There are times she feels frustrated, guilty and couldn't comprehend why she doesn't share the same excitement of her pregnancy as others.

She struggles with her mixed feelings toward her father who recently has passed away. She feels guilty that Billy, who was a bright student, has to change his plan because of her. She wishes her supportive mother will offer more guidance into her life. After the narrator's first encounter with Jenny Hauser, she feels attracted to Jenny and getting more obsessed with her. Probably I'm as confused as the narrator, I'm not sure she falls in love with Jenny, or maybe she feels lonely and yearning for someone that she can talk to.

This story wasn't really what I expected. It is more complicated and deeper than I thought. I didn't know I will end up with a dark story after reading the description of the book. Although dark stories are not my usual reading, I was surprisingly enthralled into the story. Sometimes, it has an unusual effect on me. It gave me the feeling as if I'm looking at the ceiling fan spinning around while falling into my thoughts. This is a great debut novel for the author, and I hope readers who love dark stories will appreciate better than me.

The funny part is I just realised that this book should be funny, based on the description of this book on Goodreads. I admit there are times that the narrator has wild or unusual imaginations, but I never felt the story is funny. Probably I read this book too seriously because what I felt throughout the entire story is melancholy. When I reached the part about the awkwardness and cold treatment from her former schoolmates, and her partner questioning her about college applications and the future, there was a rush in me feeling wanted to cry for her. The feeling of overwhelmed or daunted by the future, and it makes me feel scared when thinking that she has a different path than her peers at that stage. I wish I can be her supportive friend, but to be honest, I don't know how to help her in a way that she wants.

Random thought. The idea for "The Helpful Sheep" game reminds me of a game that I played a few months ago. The game is called "Dropsy", which it's about a clown that goes around the town helping others, and in return, he will get a hug from them. I'm wondering whether the author plays that game before, but it's ironic that a similar concept of a game comes from two different people appearing in a different form.

Thanks to NetGalley and HQ for providing me with a free review copy in exchange for my honest opinion.