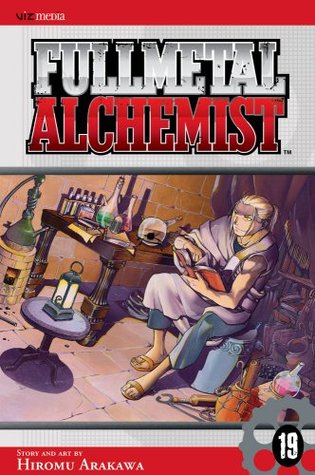 Major General Armstrong is summoned to the Central City headquarter. She is questioned by King Bradley regarding the disappearance of Lieutenant General Raven. She admits that she had killed him after he reveals King Bradley's real identity, the immortal army, and the Homunculi. King Bradley admires her courage and allows her to take over Raven's position in exchange with his men in charge of Fort Briggs.

Meanwhile, the President sends his people to look for Izumi Curtis, but she already went for travelling with her husband while her apprentice is in charge with her shop. Bido, a chimera who was hired under Greed, witnesses the scene. He follows the army men by hiding under the truck.

A flashback of a man with the name 'number twenty-three' working as a slave and discovers an experiment specimen. After naming the man Van Hohenheim, the strange specimen introduces itself as Homunculus, the dwarf inside the flask.

Meanwhile, Colonel Roy Mustang finally able to crack the hidden message through a brief conversation with Riza about their military training when they had lunch on that day. Although it's difficult to believe that Selim is a Homunculus, nothing is impossible anymore for Colonel Mustang.

The story continues with the flashback of young Hohenheim working as a slave and learns how to become an alchemist. During that time, the king wants to achieve immortality, and the Homunculus shares its knowledge to him. The entire Bodath village was wiped in a night to create the Transmutation Circle. During the ritual, the people who are with the king at that time have died as well. And the Homunculus reveals that he has tricked the king by using his blood within itself to open the portal while standing at the centre of the transmutation circle.

The only survivors left after the opening of the portal are Hohenheim and the king. But the Homunculus has taken the king's body, and he gives Hohenheim a body that never decays. That is the result of sacrificing all the souls in the country and also using Hohenheim's blood to create a vessel for himself.

In another story, some of Izumi's organs were taken when she tried to resurrect her dead baby a long time ago. Although Hohenheim unable to replace the organs taken from her but he improves her blood circulation, and Izumi feels that she can breathe better now. Hohenheim later reveals to her that he is the human's Philosopher's Stone. The Philosopher's Stone comes in various names and shapes. The one Kimblee has looks like a crystal and whoever possesses it able to transmute without a transmutation circle.

Meanwhile, Winry and the others have found the exit out of the mountains which leads to the fort. They encounter Al, and he warns them about the troops from the Central.

Ed tries to buy time to distract Kimblee while the snipers are setting up. Before the snipers can fire under Miles' orders, Kimblee uses his alchemy on the snow to create a mist to obstruct the snipers' view. He sends Darius and Heinkel in their chimera forms to stop Ed. Ed finds he has poor visibility due to the mist while the chimeras with their sharp animal senses can track him. Finding the dynamite just as the two chimeras are catching up, Ed lies about the failure of using the dynamite but actually transmuting ammonia with the cold temperature. The gas renders them unconscious due to their sharp sense of smell and Ed has caught up with Kimblee. Ed kicks away the Philosopher's Stone to prevent Kimblee from using it. However, Kimblee reveals he has another Philosopher's Stone in his mouth and creates a giant explosion, burying Ed, and the chimeras in the remains of the lookout tower.

As Ed wakes up, he finds Darius and Heinkel are trapped in the rubble, as the two are angered by Kimblee's betrayal. When Ed starts to blackout, he realizes a sharp metal girder had penetrated the side of his body, and he is now bleeding badly. At the location of Scar's group, Al again feels that his soul is being dragged from his hollow body and fainted.

Ed uses alchemy to remove the girder and then free Darius and Heinkel before passing out. Darius and Heinkel are surprised by his kindness, but Ed needs them to remove the rest of the girder from his body before he dies. The two agree to do it, and Ed will quickly close the wound with alchemy before he loses too much blood. Ed then reveals his plan is to sacrifice some of his life-force, even if it means by shortening his own lifespan in the process. Ed transmutes on the wound when the girder is out of his body before passing out. He wakes up a few seconds later to reassure that he is still alive, but he is not fully healed yet. Heinkel suggests to find a doctor, but Ed states there is no time for it. He needs to catch up with Kimblee before the others are in danger but passes out again. As Heinkel notes there is no chance for Ed to move in that current condition, he notices and picks up the Philosopher's Stone that Ed knocked away from Kimblee earlier. After Kimblee's betrayal, the two decide to become free men and take the wounded Ed to a doctor with Ed on Heinkel's back.

In an abandoned house up north, Mei, Dr Marcoh and Scar attempt to decipher his brother's cryptic alchemy notes. Al awakes to find his armoured body in disassembled pieces. The others explain that he was too large for them to carry in without coming apart. Mei is hit with a flash of inspiration and takes out the notebook's binding and group together all the pages that refer to "gold" and "immortality". Mei recognizes some of the patterns and draws lines between certain symbols. The secret behind the notes appears to be that Scar's brother had discovered the existence of the Nationwide Transmutation Circle being constructed around Amestris. However, already having known about the circle, Dr Marcoh and the others fall into despair. Al urges them not to give up, asserting that the research notes may indeed hold even more secrets. When Yoki's sneeze has flips several of the pages upside down, Al suddenly has an idea and asks everyone to turn the pages over. To Mei's surprise, it is a new Amestrian national transmutation circle which activated through the purification arts.

In the mines beneath Baschool, Kimblee has lost Scar's trail but stumbles across the tunnel being dug by the Homunculus Sloth. Homunculus Pride orders him to abandon the search for Scar and head to Fort Briggs to carve a "Crest of Blood". The Homunculus also informs him that Sloth's tunnel is nearly complete.

In Reole, the townspeople work diligently to repair the damage of their village while Rose distributes food to all the hungry and tired citizens. She is greeted by a starved Van Hohenheim who asks for some food and explains that he has come to town to visit the Church of Leto. Rose and the food stand vendor take him to the abandoned church's basement where it appears that a specific section is blocked off by a toxic spring. Realizing that the toxic water was placed there to prevent ordinary people from venturing beyond a certain point, Hohenheim asks his two escorts to remain behind. He steps across the water, an earthen bridge forming alchemically beneath his feet as he walks. After a while, he reaches the tunnel and assaults by Pride. Hohenheim asks if Pride is angry, but the Homunculus replies that anger and all the other necessary emotions do not reside within his being. He had left them all with his Father when he was created. Pride asks if Hohenheim would like to meet his Father, but Hohenheim asks Pride to deliver the message to his Father that "Slave 23" will be visiting soon. Returning to the base of the church where Rose and the old vendor are waiting, Hohenheim demolishes the bridge and explains that he had gone to make a declaration of war.

At Fort Briggs, the soldiers notice that forces from Drachma have begun just beyond their wall and move to counterattack. On the Drachman side, Kimblee plays the role of consultant to the enemy commander. He reveals that Major General Armstrong is away from her castle and that several men inside the fort are already eager to turn traitor once the fighting starts. Armed with this information, Drachma begins firing its cannons on Briggs. Meanwhile, in the northern town of Asbec, Zampano contacts Envy and Wrath by phone to let them know the location of Dr Marcoh.

Inspector Mislan Latif's shift has ended, but the incoming shift team has…

Winry arrived at North and picked up by Kimblee. He reveals to…