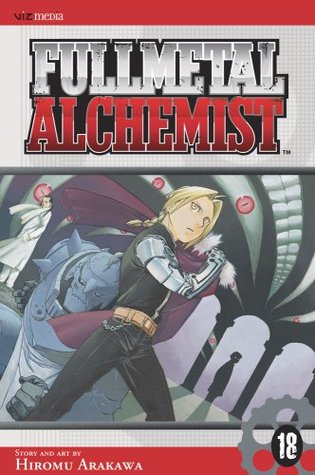 Winry arrived at North and picked up by Kimblee. He reveals to her that when they tried to rescue her parents last time, her parents had already been killed by the Ishbalan rebels. She replaces the auto-mail arm for Ed and leaves with Briggs mechanical staff for the workplace tour. Winry is also eager in learning the cold climate auto-mail technology which is advancing in the Northern area.

In the meantime, Al is still in the cell. He realises this must be Kimblee's idea to separate him from Ed and has brought Winry as a bargaining chip.

At the site of the underground tunnel's new secret entrance, it has been a week since the scouting party has left to explore the tunnel. Major Alex Armstrong and with several soldiers are venturing into the tunnel for the rescue mission. Before Captain Buccaneer leaves, he asks Major General Olivier Armstrong to seal the entrance if their party has not returned within twenty-four hours.

In the tunnel under Briggs, the group comes across the dead horses and severed limbs of the first group of soldiers, as well as pieces of metal that have mysteriously been sliced into pieces. They also discover two terrified survivors of the previous party trembling in the dark. The two survivors ask the group to escape quickly and turn out all their lamps, as the light draws "the shadow". The mysterious shadow creeps along the tunnel wall to prey on Buccaneer's group but quickly disappears without having been noticed. Narrowly having escaped death, the rescue party returns to the fort.

Back in Central, Lieutenant Hawkeye arrives at the Fuhrer's executive mansion with important papers for King Bradley to peruse. However, Mrs Bradley informs her that her husband is out at the moment. As Riza hands the papers over, she senses a malignant presence creeping up behind her and rapidly turns to face the newcomer, who turns out to be Selim Bradley, Fuhrer's adopted son. Mrs Bradley adores her adopted son and Riza, remarks that the boy's outgoing nature must come from Mrs Bradley's side of the family. But Mrs Bradley replies that Selim is actually a distant relative from her husband's side. Riza is shocked and hastily ask to leave. She remembers that according to Mustang's account, King Bradley is a Homunculus and should not have any blood relations. Also, with the strange presence given by Selim a few moments ago, she comes out with a conclusion which later confirmed by Selim when he suddenly appears from behind. Selim responds that he will leave her unharmed so long as she tells no one of her discovery. He declares that Gluttony's presence is far inferior to his own. As the mysterious shadow from the tunnel spreads out from within his body, Selim explains that he is actually the very first Homunculus: Pride.

Back at Briggs, Kimblee holds a private conference with Ed and explains that the time has come to perform his duty as a State Alchemist. The Fuhrer has ordered that the Fullmetal Alchemist assists in Red Lotus' north area to search for Scar and Dr Marcoh, and also to carve a Crest of Blood into Briggs. Kimblee explains to Ed about Crest of Blood is carved by killing the people of this land and use their blood and sorrow to create something magnificent just as in Ishbal. Ed refuses to help, but Kimblee reminds him that it is an order, not a negotiation. When Ed questions his reasons for supporting such a wrongful act, Kimblee reveals that he wants to see who will win in the battle between humans and the Homunculi. Towards the end of the conversation, Kimblee offers Ed the reward of the Philosopher's Stone if he completes the given tasks.

Ed reveals the truth to Al and Winry with the presence of Kimblee. With Al's approval after the revelation, Ed accepts the job with the condition of taking Al along. He tells Kimblee that he wants to track Scar first with the reason of avenge for the death of Winry's parents. However, Al knows that Ed has a different plan, and the given excuse is to trick Kimblee.

They begin to search for Scar by heading east to Buzcoul. The Elric brothers sneak away from Kimblee's men, and Mei Chan appears from nowhere but excited to see Al. At the same time, Scar is found by Kimblee's men which turns into chimeras while the Elric brothers and Winry talks to Dr Marcoh and Mei.

The Elric brothers arrive on time and fight with the chimeras. The chimeras claim that they come from the Central, but the Elric brothers aren't convinced with it. They defeated the chimeras and captured Scar. Major Miles reveals to Scar that he is a half Ishbalan, and he works in the Amestrian army with the mission to change people's attitudes towards Ishbalan. When Kimblee is on his way to the target place after being informed about Scar's capture, an explosion occurs from the building.

Meanwhile, at the underground tunnel, Major Armstrong and the troop finally finds the ladder for the exit. The 24-hour window has passed, and the exit has already sealed. Just as Buccaneer prepares to dig their way out with his automail, the trap door opens, and the soldier who is guarding over it welcomes them back. The Captain asks why the entrance was not sealed as he had requested and the guard responds that the watch given by Major General had not yet marked one full day. Buccaneer inspects the watch and notes that it is clearly and obviously broken. When Buccaneer is talking to Major General on the rooftop, a troop claim they are from Central City headquarter arrives in front of their building.

Before Kimblee arrives at the area for Scar's capture, Major Miles has to come out with a plan. They can't allow the Kimblee's troop to know that Dr Marcoh is there. Scar cannot be captured by Kimblee because they need him to translate the research notes. Winry needs to be freed from being held hostage by the Central City military. And they must not allow Kimblee to find out that the Elric brothers are involved in any of this. Also, Major Miles has an order to bring Mei back to Fort Briggs for her knowledge of the purification arts. Under the brother's oath with the sworn on the blood of Ishbal, Scar promises Major Miles that he will co-operate when Major Miles has to bring him along with them. Dr Marcoh and the others get to the fort using the underground tunnel. Winry comes out with a plan by putting her life on Scar's hands to trick Kimblee.

Back to Briggs, Major General Armstrong has been called to Central City. If the Major General is gone, the commander who is loyal to Bradley will most likely be instated in her place. This means Winry and the others are walking right into the enemy's hands. Al offers himself to go through the snowstorm to stop the others from going to the fort. During the snowstorm, Al battles with visibility but sees his physical body at that moment. He senses his physical body is pulling his soul towards it.

Towards the end of this volume, the Father is holding figures representing Al, Ed, Von Hohenheim, Izumi Curtis (the brothers' teacher) and another unknown sacrifice. The figures are placed on a Transmutation Circle.

Major General Armstrong is summoned to the Central City headquarter. She is…

This final volume begins with the story of Erina's parents, especially Erina's…