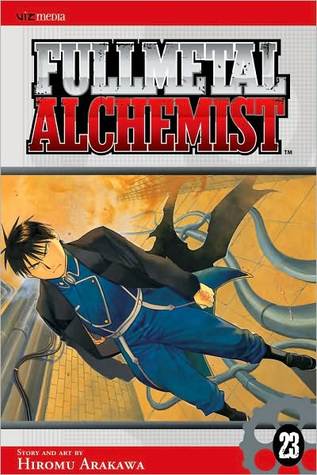 Al uses the smokescreen to attack Kimblee from behind and Pride slices it up with his shadows. Al regenerates any damages to his armour using the Philosopher's Stone and blocks Pride's attack before transmuting it further. He manages to trap Pride again but Pride breaks free, only realises that a Xingese flash bomb near him. This is to destroy Pride's shadows and traps him in another dome. Kimblee asks why Al didn't use the stone to restore his body, and Al asks why there are always two choices between saving and sacrificing. Then, Kimblee reveals he has another Philosopher's Stone in his mouth.

Major General Olivier realises that bullets have no effect on Sloth. The soldiers arrive and order Olivier to surrender. Olivier uses a bomb to kill the soldiers but got caught by Sloth. Major Alex Armstrong comes to rescue his sister from Sloth. He attacks Sloth in the head and Olivier attacks that area with her sword. When two soldiers arrive and order them to surrender, Sloth kills them at superhuman speed and grazes Olivier's injured arm. Despite his weight, Sloth is capable of moving too fast for them to see and admits that he is the fastest Homunculus. Olivier realises that he is also too quick to control himself. The homunculus rams her with his shoulder causes her experiences fracture, and Alex has a dislocated arm.

Pride breaks from the dome and they know Al is hiding nearby. Al creates a new dust cloud but Pride, with his new sense of smell, sneaks up and catches Al with his shadows. Pride mocks at him for being so predictable and telling Al that he can't win alone even he has the stone. Al reveals that he no longer has the stone and Pride quickly realises that those dust clouds are to cover Al and to conceal the actions of his allies that blocks his sense of smell. Pride tries to warn Kimblee, and just as Kimblee realises it, a transformed Heinkel attacks him from behind, biting him in the neck. Heinkel holds the wounded Kimblee in front of him, causing Pride's shadows to stop and withdraw. Pride claims that the enemy still won't be able to win against them, with his Father in Central.

Suddenly, Yoki arrives in a jeep and knocks Pride down. Heinkel is holding Kimblee's body in his other arm while dragging Al's leg with the other arm and heads to the jeep. Dr Marcoh is surprised with Yoki's appearance. Heinkel throws Kimblee's body towards Pride's direction and quickly gets into the car, and head off towards Central. After they leave, Pride uses his shadows to absorb Kimblee's body so he could live inside him.

May continues her fight against Envy, who is now able to use his new body to extend his hands to attack. The mannequin can't die easily due to the Philosopher's Stone. Envy believes that if he absorbs the mannequins, it will make him even stronger. May points out that it is easier to run away and the Philosopher's Stones in those soldiers are what she needs to complete her mission to save her clan.

Ed's group continues to fight the Mannequin Soldiers, but Zampano's quills and Jerso's saliva are running low. Just as Ed is pinned down and about to get attacked, Mustang comes into rescue. The Flame Alchemist produces a torrent of fire that burns the Mannequin Soldiers. May continues to flee from Envy, causes the tunnel collapses and plunges them both directly into the midst of Ed's group. After Envy tries to create conflicts between Scar and the State Alchemists, Mustang demands Envy the name of Maes Hughes' murderer. After pinning it on Ross, Envy finally admits that he is the real killer and reveals his trick by transforming to resemble Hughes' wife, Gracia. Convinced with Envy's admission, Mustang prepares his alchemy gloves and swears that the first thing he will burn away is Envy's tongue.

The townspeople are listening to the radio broadcast airing a live interview of Mrs Bradley, revealing that the Central City military was trying to kill her but saved by the Mustang's group. Mrs Bradley is oblivious with her family's situation, and Breda approaches the mic with the news of someone bombed the Fuhrer's train and is now missing. Mrs Bradley faints after hearing it, and Breda claims that Colonel Mustang got wind of the military's coup, and decides to support the Fuhrer.

General Klemin makes a phone call to the station master to stop the interview as the accusation continues against the military. The station master tells the General that they are being held hostage before hanging up. Ross takes over the mic and expresses the support to Mustang's group. The townspeople start to believe what they heard from the radio, especially Ishbalan, arrives at the capital and confirms the news. Meanwhile, a Briggs tank appears and firing at Central Command.

Meanwhile, Colonel Mustang tells the rest that he will handle Envy by himself. Envy tries to fight Mustang in his original form but couldn't stand with Mustang's continuous flame. Envy switches back to human form and flee. Mustang chases after Envy and Riza follows Mustang to provide assistance. Envy tries to trick Mustang by changing his form to resemble Hughes. This increases Mustang's anger and torches the impostor. Riza disobeys her order and plunges into the dark tunnels ahead in pursuit of her commander. Riza and Mustang encounter each other in the maze-like tunnels. Mustang informs her that he has lost Envy's trail and orders her to stick close to him. She complies, but as they continue on in search of the prey, Riza raises her gun again and takes aim at the back of Mustang's head. Mustang is surprised with her action, but Riza grins and remarks that the real Mustang always calls her by name when they're alone. Envy is furious with being found out and tries to flee, but Riza shoots him in the head and tells him that what she said was a lie. She fires non-stop until out of ammunition, but Envy is still alive. Mustang arrives at the scene and continuously attacking Envy until the homunculus turns into dust. Envy's larval form squirms from the husk and attempts to wriggle away but held fast by the Mustang's boot. Mustang prepares for one final flame to destroy Envy, but Riza aims her gun at Mustang, demanding him to stop. Mustang refuses to let anyone else kill Envy. Suddenly, Ed and Scar appear, and Ed uses his alchemy to take hold of Envy from beneath Mustang's grasp.

Ed and Scar tell Mustang that he needs to take a look at his own vengeance face and also for the sake as a future leader of the country. Riza asks Mustang to let go of his hatred, else this will force her to shoot him, and she will end her own life as well. Hearing this, Mustang finally let go and apologises to his comrades.

Envy scoffs at all this human sentiment and makes a last-ditch effort to turn them against each other, but Ed remarks that Envy is just jealous of humans. Envy forces himself free of Ed's grasp and claims that he has been humiliated by humans, and the biggest insult is Ed's compassion. Envy reaches inside his body and rips out his own Philosopher's Stone, taking his own life. As Envy and the stone crumbles to dust, Mustang laments the Homunculus' cowardice.

Inside Central Command, Sloth regenerates his body after attacked by Major Alex Armstrong. Major General Olivier Armstrong takes command of the Central soldiers to defend them from the Mannequin Soldiers. Alex dislocated his left arm after the beatings from Sloth. However, he able to fix back his shoulder after he positions his body which causes Sloth to pop his left shoulder back into place. Alex continues with his attack on the beast by using his fists and his alchemy at the same time.

As Central Command's main gate continues to take fire from the Briggs tank across the street, General Klemin orders to return fire despite the civilians in the area haven't fully evacuated yet. Suddenly, an explosion occurs at Klemin's office and Captain Buccaneer bursts in with his men. Klemin wonders how they know their location. The soldiers from Briggs explain that it was an effort from 2nd Lieutenant Falman's memory of the Central Command layout and also an entry tunnel has been dug by alchemist Izumi Curtis.

Al wakes up and sees his father, Hohenheim. It takes some time…