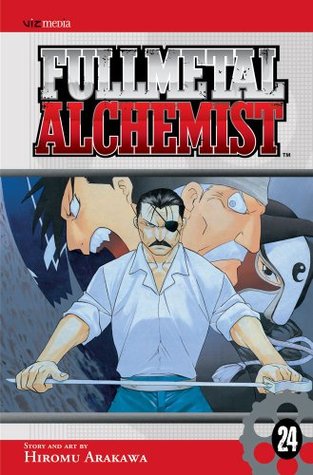 Olivier Armstrong patches into Captain Buccaneer to warn him of the Mannequin Soldiers. She orders him not to open the gates to disallow the Mannequin Soldiers from entering into the city, but exterminate them all within the headquarter building itself. Before another General can take control of the Fuhrer's office, the Mannequin soldiers appear and kill him.

Sloth regenerates his body and moves at high speed, which knocks Alex and Olivier to the ground. Alex orders the soldiers to stay away since they are what Sloth is after. When one of the soldiers notices a large chain near them, they use it to delay Sloth so that Alex and Olivier can get away from the place. Alex refuses to leave after remembering the previous disgrace from the Ishbal Civil War. Izumi comes into rescue and reveals to Olivier that her subordinate sent her to help them. Izumi quickly grabs Sloth with her arm and tosses him, and her husband Sig Curtis smacks Sloth on the neck with a powerful blow. When Sloth charges again, both Alex and Sig work together to attack and throw Sloth up to the ceiling. Sloth lands on one of Alex's previous transmuted spikes and his body begin to dissolves due to the losing power of his Philosopher's Stone. Sloth is slowly dying before dissipating completely.

While Olivier needs time to rest from her battle, she thanks Izumi for her help. She only realises Izumi's identity after she mentions her relationship with the Elric brothers as well as being a housewife and an alchemist. Izumi also reveals that since she is also a human sacrifice, she needs to leave soon before that man catches her, as Hohenheim confronts Father in his hideout.

Hohenheim asks why Father is no longer has any emotions, and Father replies that he doesn't want to become a human. Instead of responding to Hohenheim's further question, Father attacks the alchemy, but Hohenheim uses his own alchemy to block the attack. Then, Father absorbs into the ground and appears from behind and goes through Hohenheim's gut with his arm to grab the Philosopher's Stone. He states that he wants to become a perfect being and plans to absorb the Philosopher's Stone within Hohenheim for himself. However, his plan fails as Hohenheim tells him that he has done something that Father never expects he will do.

A flashback of Hohenheim is seen travelling through the desert and collapse from exhaustion. A group of men found him and recognises that he is from the west due to his appearance. They assume that Hohenheim is already dead until he shows signs that he is still alive. One of the men reveals they are merchants from Xing and they give him some water to drink. But Hohenheim only can mumble that he is running away from a place and keeps apologising to someone.

Back to the present state, Hohenheim mentions several people that he used to know and explains that their souls are working together with him to defeat Father. Father refuses to believe him, and Hohenheim tells that he has conversed with all 536,329 souls inside him and the souls in Father's body create a spike through Father's head. Father breaks the spike, but more spikes emerge from different parts of Father's body as Hohenheim says they are going to end his life and ask him to go back to where he comes from. However, to Hohenheim's surprise, Father absorbs the spike and discards his container. Father explains that not only humans have the capability to evolved over the years, and he created a giant Eye in the ceiling.

Meanwhile, King Bradley returns and charges towards the Briggs tank, deflecting its gunfire. He slashes the tires with his sword and throws a grenade into the tank, destroying it and killing the Briggs soldiers inside. After easily slices and destroys Buccaneer's automail arm in the courtyard, Bradley orders Falman to open the gate for him but crying Falman heads him at gunpoint. Buccaneer still try to fight despite his wounds and King Bradley claims that is an act of reckless courage. Their confrontation is interjected by Greed, who is sitting on top of the gate.

The Briggs soldiers try to assist Ling but got killed by Bradley's sword. Buccaneer tries to attack him but got stabbed through the stomach and severely injured by him. Ling warns them not to be reckless and continues to fight with Bradley. The Central soldiers begin their attack, and Ling tells the Briggs soldiers to deal the Central City troops while he's handling Bradley. Then an explosion of a smoke bomb occurs, and Fu appears and charges in to attack Bradley.

At the radio station, Mrs Bradley receives the news that her husband is alive. After hearing that Bradley is sweeping up the Briggs soldiers, Breda decides to pin the blame on Olivier while Ross leaves the place immediately. As Ross and Fuery are getting ready to deal with the troops outside the radio station, the troops send an unarmed guy to enter the building for negotiation. Ross agrees to it and says that he is someone that they can trust as Denny Rosch enters the building.

Olivier and Izumi are interrogating a General, and he states that the sacrifice of innocent men and women is to achieve immortality and to rule the world. Olivier makes a call and learns that the Central's troops have begun to regroup and it's a matter of time that the troop will strike their location. Then, they find a stairway leading downstairs, which is the only way out.

At the location of Ed's group, they are wandering around to find the entry to the Father's lair. But what they found is an unknown old man appears in front of them.

Buccaneer awakes from his blackout while the Briggs soldiers and 2nd Lieutenant Falman are keeping the Central's troops from coming up to the stairs. Ling and Fu are still fighting against Bradley. Bradley keeps striking at Fu until the knife breaks, and Bradley takes the advantage to injure him. Fu's forehead starts to bleed, blinding him. Ling takes control of his body and saves Fu from further attack, but Fu offers himself for a final sacrifice. He reveals his body which already sticks with explosives and charges towards Bradley. Bradley uses his sword to cut off the fuses but never seen the coming of Buccaneer's sword thrusting from Fu's behind to him. Lan Fan arrives on the scene and witnesses the death of her grandfather Fu.

At the location of Mustang's group, the old man reveals to them that he is the creator of King Bradley. After questioning the doctor and they know he is on the enemy's side, the doctor summons a group of men who failed to become Bradley. They are well-trained with combat skills for sixty years and hoping to become the future president. However, King Bradley becomes a successful product after twelve attempts, and other candidates are no longer needed. Then, the doctor draws a transmutation circle on the floor to connect the basement of each of the five laboratories. The energy causes a minor earthquake which can be felt by the entire city, including animals and Heinkel the chimera. Then, the transmutation circle has summoned the gate, and the sacrifices - Ed, Al and Izumi are transported to another location.

Greed continues fighting Bradley, and when he tries to throw Greed from…