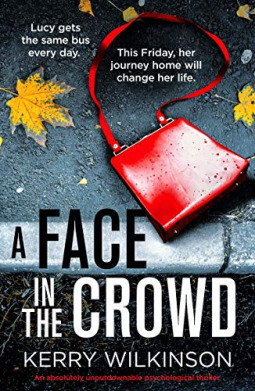 Five years ago, Ben was nervous about leaving the house on an important day, although it never mentioned where he will be going on that day. But one thing for sure is Ben, who works as a trader during the day is working hard for his and Lucy's wedding plan.

Back to present, the narrator or Lucy takes the bus number 24 on Friday night, and the bus is crowded. She can barely afford to pay extra for the bus fare but saves by a teenager. After getting off from the bus, Lucy feels something is not right as she is about halfway back to her home. Then she only finds a new envelope is in her bag which contains thousands of pounds.

Lucy decides to hand in the money to the police. She is tempted to keep the money as she is so broke and can't even get herself a pair of new shoes. The story slowly reveals why Ben is not with her anymore, and she is suffering with huge debt left by him.

The pace is unacceptably slow, and it feels like reading someone's diary of what to do with the newfound money. There was a lot of baitings for Lucy to take the money,  judging by his financial situation. Then, the people around her are so poor, even her customer that she works as a cashier, and everything is coincidentally broken or doesn't work after she has the money.

The entire story is mostly about Lucy's life with her dog, and she doesn't know what to do with the money. She has spent some of it but she still searching whether any news about the lost money. And it expands throughout the entire story. Dog's life, considering to hand it to the police, looking for any notice about the missing money, spending the money, and repeat.

I don't get the logic why she suddenly searches a deceased person's name after she leaves her date's apartment. The dead person is her former boyfriend's brother Alex. I don't know what the author is trying to imply when Lucy finds out Alex was charged with assault before. Yes, her date is assaulted, but still, why suddenly wants to look for him on the Internet? What prompts her to connect Alex to the assault?

As the story gets further, it gets deviated from the storyline and flooded with an excessive amount of details about Lucy's dog Billy. The story of her dog covers more than eighty per cent of the book, but the progress about the money is always the same state.

I  really liked the author's use of words, but unfortunately, the execution didn't work well for me. I felt the story is static, repetitive, and lacking exciting characters to support the story. Somehow I felt empty after finishing the book as if I didn't read anything because it fills with the story of the dog to extend the storyline. The more I read, the more I felt a lot of details didn't make sense in this story. Something is not right, but I don't know to put it into better words. It seems there were bits and pieces here and there that didn't hold the story together, and the ending lacking logical sense.

I feel bad for giving such a harsh opinion about this book because I read a lot of positive reviews about the author. It gives me a sense of guilt because this is the first book I read from the author, and it's like a first date, it doesn't work for both of us.

Rating: ★ (1/5)
More reviews can be found on Goodreads: A Face in the Crowd by Kerry Wilkinson.

Why Men Rape: An Indian Undercover Investigation by Tara Kaushal

I started to feel disappointed when I only read the introduction, and…

Riley is on his way home after a football session. During the…