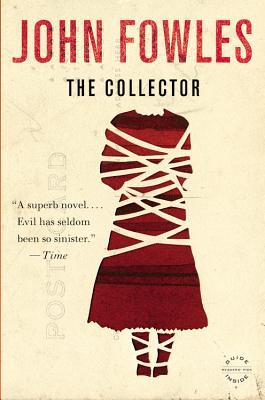 Clegg works as a clerk in a city hall. His favourite thing to do during his free time is collecting butterflies. Clegg is obsessed with Miranda Grey, an art student who lives opposite the city hall. He admires her from a distance and even has an observation diary with her daily details.

One day, Clegg wins a vast amount of money from a pool and quits his job. He spends some of the money for small luxuries but still feeling lonely, and can't forget Miranda. Without Clegg's knowledge, he is progressively turning his fantasy into reality. He buys a camper van and a secluded old cottage. Clegg starts to build everything by himself to carry out his plan. He already visualises how to carry the food tray without suspicion in case someone finds it out, how Miranda wants her room looks like, a furnace to burn her rubbish, and even spends lavishly on dresses for her.

The first part of the story tells the life of Clegg and Miranda in the confined cottage. Clegg has always been wanted to be with her, but there are times, he feels difficult to understand her. Of course, he's not a sociable person and to understand women is another challenge for him. Miranda is a smart woman who probably knows Clegg's weakness after she learns his intention of kidnapping her. Because of that, there are times she will be teasing or be friendly to him, trying to negotiate better terms for herself. Also, she uses his weakness to stamp her authority on him. Although Clegg is obsessed with Miranda, he treats her respectfully and with special care.

The second part is narrated by Miranda in diary format, focuses on her life in the cellar and what she thinks about her kidnapper, Clegg. Miranda not only pours out her loneliness and fright in her journal but also despises Clegg's behaviour and his distaste in everything. To keep her feeling alive, she also tells her complicated relationship with G.P., a man who is twice her age. Miranda recalls G.P.'s wisdom, her jealousy and feeling betrayed by him. There are times she feels being belittled by him, but ironically,  she similarly treats Clegg as how G.P. treats her.

The third and fourth part narrated by Clegg, telling about Miranda's life in the end which also leads to her long strive freedom (although probably not what most of us expected) and how Miranda's journal changes Clegg's decision for his life.

Miranda is ambitious, views herself belonging to higher social status and sophisticated, despises and looks down on Clegg but sometimes feeling pity with his loneliness. Miranda who always put a person's virtues and class as her personal benchmark on others, but has her personal conflict due to her mixed feelings on Clegg.

Clegg admits that sometimes, he doesn't really understand Miranda, but that is not his real concern as he just wants her to be at his side all the time. However, his feelings begin to change when Miranda makes her desperate move to escape from him.

Miranda's journal truly reflects the state of her mind after being confined in the cellar for several weeks with Clegg, who is socially underdeveloped. She sounds lively, still hopeful with her future and lots of escape plans at the beginning. But towards the end, she becomes delusional, blaming herself and Clegg, insensible, and full of rage in everything.

The author has a very unusual fascinating storyline of a butterfly collector who is obsessed with a particular woman but the inability to build a stronger bond with her. The author provides two main perspectives, which is from the captor himself and another from Miranda's view on her kidnapper, who has been stalking and obsessed with her for quite some time without her knowledge. Both perspectives indicate both struggling to gain power over each other. Although I'm not really interested in Miranda's references to literature, art, and pop culture, it's still a remarkable story from the author.

Rating: ★★★★ (4/5)
More reviews can be found on Goodreads: The Collector by John Fowles.

Why Men Rape: An Indian Undercover Investigation by Tara Kaushal

I started to feel disappointed when I only read the introduction, and…