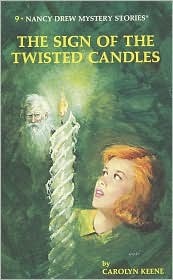 Nancy and her friends Bess and George are heading for a secluded inn called The Sign of the Twisted Candles. There are rumours from their neighbours that an old man was virtually a prisoner in the tower of the old-fashioned mansion. Bess and George asked Nancy to drive out to investigate the rumours.

When they are in the inn, they meet Carol Wipple, who works as a waitress there. They learn from her that indeed there is an old man who lives in the tower. His name is Asa Sidney and his 100th birthday is on that day. It turns out that Carol is a foster daughter of Frank and Emma Jemitt. The Jemitts use this property in exchange for taking care of Mr Sidney.

On that night, Carol calls Nancy and asks whether Nancy's father can come to the tower to draw a new will for Mr Sidney. On the next day at the inn, Mrs Jemitt trying to stop them from meeting Mr Sidney but Nancy able to get her out of their way. Before another two relatives come to visit Mr Sidney, Nancy has to fetch a respectable witness for the will.

Nancy's father has become Mr Sidney's lawyer and causes some damage to the friendship between Nancy and her friends. After all, George and Bess are related to the Boontons (Mr Sidney's wife). When Mr Sidney passes away, this increases the chaos of family feud between the Sidneys and Boontons, plus the Jemitts as well.

This story has lesser unrealistic and heroic scenes comparing to other stories before this. It doesn't try to portray Nancy as a heroine and also less being pushy. Nancy can get aggressive when she so eager to solve the case and keen for adventure. This story more reflects the ability of her age as a detective, less of being a heroine. At least we know she scares of snakes, and not killing the snake by herself.

Besides the complicated family feud, there were so many things happening at different places. And so many people get involved or related to the case. Aside from those, the ending was really a great one.

Rating: ★★★ (3/5)
More reviews can be found on Goodreads: The Sign of the Twisted Candles  (Nancy Drew Mystery Stories #9) by Carolyn Keene.

The Collector by John Fowles

Clegg works as a clerk in a city hall. His favourite thing…