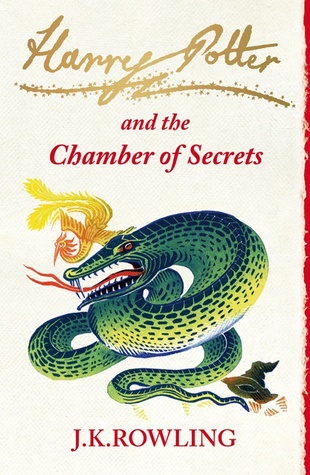 One-Sentence Summary: The Chamber of Secrets reopens after being sealed for 50 years, targeting to kill Muggle-born by an unknown Slytherin's heir with Harry Potter being the suspected heir.

Harry has been spending unpleasant time with the Dursleys before starting his second year in Hogwarts. The story's beginning summarises Harry's first year (first book - Harry Potter and the Philosopher's Stone) and his encounter with Voldemort. Dobby, a house-elf appears the first time in Harry's world, warns him not to return to Hogwarts because of potential danger to his life. In this second story of the series, we get to know more of the Weasley family members when Harry lives with them after a dramatic rescue from his uncle's house.

The main story is related to a myth that one of the greatest wizards, Salazar Slytherin, had built a hidden chamber in the castle. According to the legend, the Chamber of Secrets has been sealed, and no one would be able to open it until his own true heir arrives at the school. Besides the ability to unseal the Chamber of Secrets, the heir also can unleash a monster to purge the school of all who were unworthy to study magic. As the mysteries deepen with a series of unfortunate events following Harry in the school, Hogwarts students are speculating that Harry could be the Slytherin's heir.

Meanwhile, Professor Snape's disgruntled attitude towards Harry continues to the second year. An uncharacteristically amusing teacher arrives in Hogwarts to teach Defence Against the Dark Arts. Gilderoy Lockhart, who loves himself more than anything, is popular among the ladies, especially middle-aged witches. However, being a teacher of Defence Against the Dark Arts does not mean he has the knowledge and courage to face danger when it comes.

This second book is all right to me, but I'd prefer the first one. The first story - Harry Potter and the Philosopher's Stone, seems to have more depth, including building a solid foundation for the story and outlining the characters' background. This second story has a strong theme about Muggle-born or someone without pure blood. The opening of the Chamber of Secrets is particularly targeting the Muggle-born. There will be a surprise when the story later reveals the Slytherin's heir or probably how the Chamber of Secrets is reopened this time after 50 years ago.

Another highlight of this story is the appearance of Gilderoy Lockhart, which creates a different perspective when reading this book. It offers us something different besides stern teachers and strict discipline in Hogwarts. His pompous character has brought a lot of chuckles to the readers. One of the funniest moments is the celebration of Valentine's Day with the decoration of pink flowers on the walls and also heart-shaped confetti falling from the ceiling. The fearless Gilderoy encourages the students to ask Professor Snape to demonstrate the making of Love Potion. What a courageous man but not so brave when facing monsters or unusual creatures. On an unrelated note, I liked the irony of naming Professor Sprout as the Herbology teacher.

One-Sentence Summary: Sirius Black has escaped from Azkaban and is targeting to…

The Secret of Chimneys (Superintendent Battle #1) by Agatha Christie