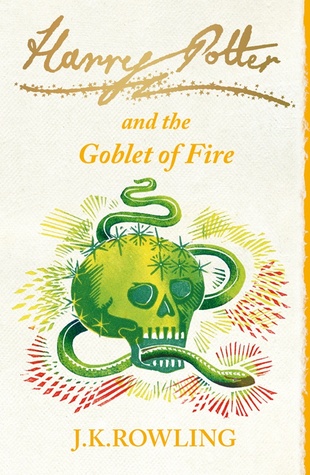 One-Sentence Summary: Voldemort wants to regain his power, but he needs to lure Harry Potter to get something from Harry to help him rise again.

I already got hooked with the story when it begins with rumours from villagers about a murder that happened a long time ago in their village. Three perfect healthy family members died fifty years ago in a manor at Little Hangleton without any harm found on their bodies. The terror upon the faces of the Riddles leads to believe that they were frightened to death. Since then, the manor has been dilapidated, but the garden is still maintained by the gardener Frank Bryce. After so many years, a light suddenly appears from the house, and Frank tries to eavesdrop on the conversation of the unexpected visitors. Nothing makes sense for Frank when he hears Muggles, Lord, Hogwarts, and he has no idea who is Harry Potter, but he knows that they are plotting to kill Harry.

Meanwhile, Harry has a lot of fun when he joins the Weasleys and Hermione to watch the Quidditch World Cup. I immensely enjoyed reading the Quidditch World Cup. The story is filled with vivid imaginations of how wizards and witches try to live like Muggles to avoid exposing their identities to the Muggles world. It was pretty realistic as if this group of people does exist in the real world, struggling to live or even using the things that are so common for us in our daily lives. Then, something strange suddenly happens after the Quidditch World Cup match. Everyone runs to the woods when a riot erupts while the Death Eaters (Voldemort's supporters) torture the Muggles. The Dark Mark (a symbol or sign of Voldemort and Death Eaters) suddenly appears in the sky. Winky, a house-elf belongs to Crouch (Head of the Department of International Magical Cooperation), is accused of conjuring the Dark Mark.

In Hogwarts, another new teacher will teach the Defence Against the Dark Arts. This time we have "Mad-Eye" Moody, one of the famous Aurors of all time. An Auror is a wizard or witch who had received high training to investigate crimes related to the Dark Arts and apprehend or detain dark wizards and witches.

Also, there won't be a Quidditch match this year in Hogwarts. It is replaced with the Triwizard Tournament, which involves the three largest wizarding schools of Europe: Hogwarts School of Witchcraft and Wizardry, Durmstrang Institute, and Beauxbatons Academy of Magic. Each school is represented by one champion to compete in three tasks to test magical ability, intelligence, and courage. The tasks are traditionally judged by the Headmasters or Headmistresses of the competing schools. Champions competed for the honour and glory of winning the Tournament, the Triwizard Cup, and a monetary prize. The Goblet of Fire will choose a name or champion to represent their schools for the Triwizard Tournament, and only students aged more than 17 can participate. As predicted, Harry Potter is one of the selected champions, even though he never puts his name in it and his age doesn't meet the age requirement. Unsurprisingly, there's always an exception for him: he can be anything without doing anything. For a moment, I felt I sounded like a Malfoy or Snape when I said that.

Among all the stories in this series so far, this story really stretches their friendships to the limit and also exposes their weaknesses. I started to get impatient with Harry's attitude, which rarely pays attention to his friends' feelings or problems. I understand that he has a lot of issues to deal with. His friends have their own problems as well, but they are always there for him. I don't see he does the same thing for them. Then, he also can't tolerate his friends for being angry with him, and he often demands understanding from them. However, when he gets furious with his friends, he feels he has the right to do so.

Ron feels inferior with his poverty and Harry's fame, but he doesn't feel bad about himself when dealing with Hermione's intelligence. Hermione's stubbornness and trying to do everything by the book can be frustrating sometimes, but one thing that is admirable about her is her high emotional intelligence. She can shut all the outside noises and ignore all the negativity from others. While reading this book, I tried to research the character 'Harry Potter', wondering whether anyone has the same thoughts as me. After more than twenty years, I just knew that many people didn't like Harry too. Some said that it's acceptable that his misbehaviour is due to his troubled childhood. I feel bad to say that I can accept the reason, but it's still unable to make me like him. Am I lacking empathy or heartless?

Anyway, this fourth story is the best I've read so far in this series. There are so many things happening at the same time throughout the story. The story and characters have so much development, which leaves readers with many things to ponder.

One-Sentence Summary: Ministry of Magic interferes with Hogwarts's administration and denies the…

One-Sentence Summary: Sirius Black has escaped from Azkaban and is targeting to…